Two new species and two new basin records of mahseers in the genera Tor and Neolissochilus are described from the upper Krong No and middle Đồng Nai drainages of the Langbiang Plateau in southern Vietnam. These new species and new records are known from streams and rivers in montane mixed pine and evergreen forests between 140 and 1112 m. Their populations are isolated in the Sre Pok River of the Mekong basin, the middle of the Đồng Nai basin, and the An Lão River. Both new species are differentiated from their congeners by a combination of the following characters: 23–24 lateral scales, 9–10 predorsal scales, 2/7 or 1/8 pelvic-fin rays, mouth position, median lobe of lower lip, rostral hood, colour in life and by divergent mitochondrial DNA. Tor mekongensis sp. nov. is differentiated from Tor dongnaiensis sp. nov. by the number of transverse scale rows (3/1/2 vs. 4/1/2), number of pelvic-fin rays (2/7 vs. 1/8), a blunt rostral hood vs. pointed, caudal-fin lobes that are equal vs. unequal, and by mitochondrial DNA (0.7% sequence divergence). Molecular evidence identifies both species as members of the genus Tor and distinct from all congeners sampled (uncorrected sequence divergences >1.9% for all Tor species for which homologous COI sequences are available). Tor sinensis is recorded in the Krong No and the Sre Pok rivers, further south of its known distribution. Polymorphism is described in Neolissochilus stracheyi with a Tor-like morph and a Neolissochilus-like morph. 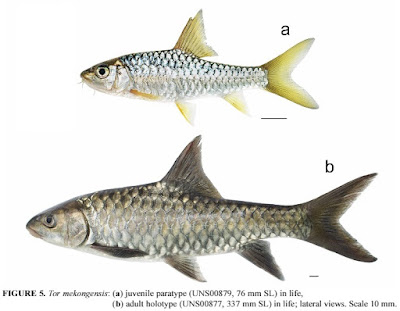 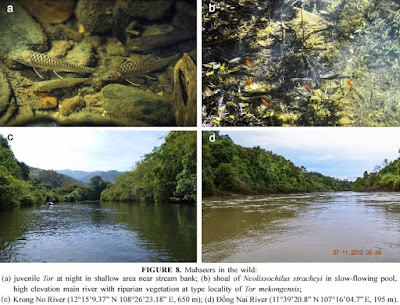