[Herpetology • 2014] A Review of Northern Peruvian Glassfrogs (Centrolenidae), with the Description of Four New Remarkable Species

ABSTRACT
Peru is well known for amphibian diversity and endemism, yet there have been relatively few field studies of glassfrog (Centrolenidae) diversity in this country. Research in Colombia and Ecuador indicates that centrolenid diversity is higher in the northern Andes. However, part of this trend appears to be due to sampling effort. We conducted fieldwork throughout northern Peru, and based on phylogenetic analysis of DNA sequences, combined with bioacoustic and morphological analyses of new and available material we now recognize 33 species from the country (versus 30 species prior to this work). Field surveys led to the discovery of four remarkable species: Centrolene charapita new species is a large, ornamented glassfrog that appears to be sister to Ce. geckoideum; Chimerella corleone new species represents the second- known member of the genus Chimerella; Cochranella guayasamini new species is the second-known member of the genus with humeral spines; and Hyalinobatrachium anachoretus new species occurs in the cloud forest of the east-Andean versant in Peru. In addition to the new species described here, we provide new country records, new localities including range extensions of up to 875 km, information on diagnostic characters and phylogenetic relationships, call and larval descriptions, and observations on natural history for several Peruvian centrolenids. Our results also revealed several taxonomic problems concerning species of the genus Rulyrana, and we conclude that R. croceopodes and R. tangarana are junior synonyms of R. saxiscandens. By implication of our phylogenetic analyses, we recognize the following new com- binations: Espadarana audax new combination, Espadarana durrelorum new combination, and Espadarana fernandoi new combination. 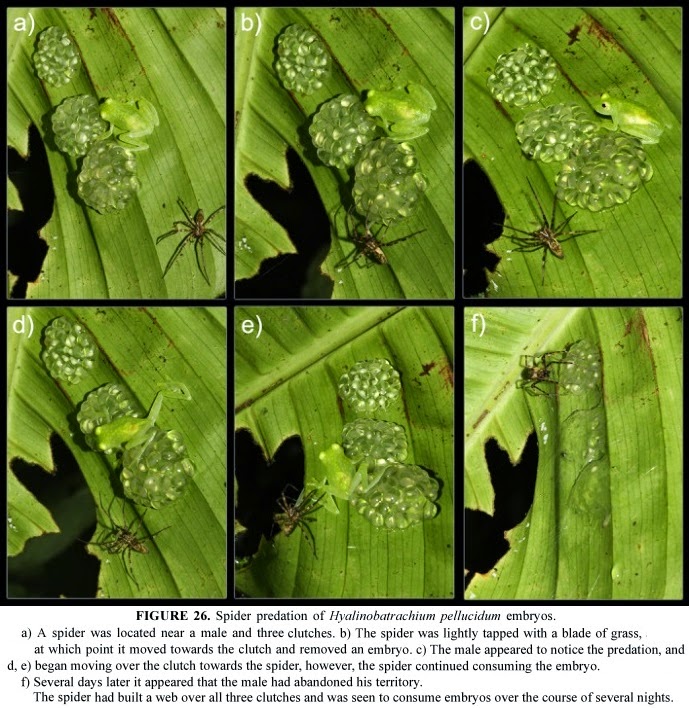