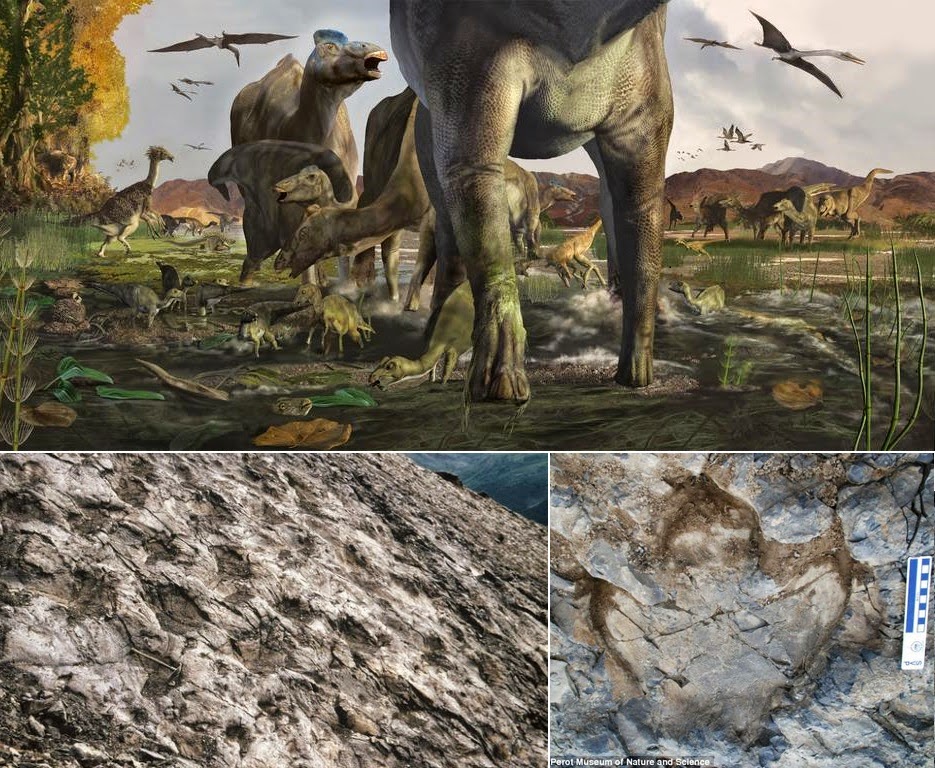 ABSTRACT
The discovery of a new tracksite of mostly hadrosaurid dinosaur footprints, made by a herd living in an ancient high-latitude continental ecosystem, provides insight into the herd structure and behavior of northern polar dinosaurs and perspective on populations of large-bodied herbivores in an Arctic greenhouse world. This tracksite occurs in the Upper Cretaceous Cantwell Formation in the Alaska Range (Denali National Park, Alaska, United States), and it is the largest tracksite known from this far north. Preservation of the tracksite is exceptional: most tracks, regardless of size, contain skin impressions and they co-occur with well-preserved plant fossils and invertebrate trace fossils of terrestrial and aquatic insects. Statistical analyses of the tracks show that individuals of four different age classes of hadrosaurids lived together in a large social group. Our research results independently corroborate the growth curve for hadrosaurids proposed by paleohistologists that suggests that these dinosaurs experienced a period of rapid growth early in their life history.

CONCLUSIONS
In summary, available data strongly suggest that polar hadrosaurids were year-round residents of the high latitudes. Furthermore, the Denali National Park and Preserve tracksite assemblage represents the first definitive evidence that Arctic hadrosaurids lived in multigenerational herds, a behavioral pattern not previously recognized from either bone beds or other track assemblages. The demographic profile of this dinosaurian herd also shows that a warm greenhouse polar world was capable of supporting a thriving large-bodied herbivore population.