[Cetology • 2014] Taxonomic Revision of the Humpback Dolphins (Sousa spp.), and Description of A New Species from Australia; Sousa sahulensis


Abstract
The taxonomy of the humpback dolphin genus Sousa has been controversial and unsettled for centuries, but recent work indicates that there are several valid species. A review of multiple lines of evidence from skeletal morphology, external morphology, coloration, molecular genetics, and biogeography, in combination provides strong support for the recognition of four species of Sousa. These include S. teuszii (Kükenthal, 1892), a species with uniform gray coloration and a prominent dorsal hump, which is found in the Atlantic Ocean off West Africa. The species S. plumbea (G. Cuvier, 1829) has similar external appearance to S. teuszii, but has a more pointed dorsal fin. It occurs in the Indian Ocean from South Africa to Myanmar (Burma). The original taxon, S. chinensis (Osbeck, 1765), is reserved for the species that has a larger dorsal fin with no prominent hump, and largely white adult coloration. It ranges from eastern India to central China and throughout Southeast Asia. Finally, we describe a new species of Sousa, the Australian humpback dolphin, which occurs in the waters of the Sahul Shelf from northern Australia to southern New Guinea. It has a lower dorsal fin, more extensive dark color on the body, and a dorsal “cape.” It is separated from the Indo-Pacific humpback dolphin by a wide distributional gap that coincides with Wallace's Line.

Based on the information reviewed above, we propose the recognition of four valid species of humpback dolphins. Specimens examined and referred are provided in Appendix S2. The four proposed species are described below:

Holotype and Type Locality: The holotype is a skull previously thought to be in the Jena Natural History Museum, but now known to be housed in the Natural History Museum, London (BMNH 1893.8.11). Type locality is “Bucht des Kameruner Kriegsshiffhafens” (the Bay of Warships, Cameroon, West Africa; Hershkovitz 1966). The skull was not figured by Kükenthal (1892), but was illustrated in van Beneden (1892) and Pilleri and Gihr (1972). Best (2007) illustrated the skull from another specimen.

Distribution: This species is found in the shallow coastal waters of western African from Dahkla Bay, Western Sahara (23°50'N) to Tombua, Angola (15°47'S) (Fig. 9). Distribution appears to be discontinuous, with some evidence of separate populations/metapopulations (Van Waerebeek et al. 2004, International Whaling Commission 2011). Currently-known range states include Western Sahara, Mauritania, Senegal, The Gambia, Guinea Bissau, Guinea, Cameroon, Gabon, Republic of the Congo, and Angola (Weir 2011), but the distribution of S. teuszii is thought to contain most countries in between. Waters of Ghana may represent a gap in distribution, and whether it occurs today in Nigeria is unknown (International Whaling Commission 2011). Van Waerebeek et al. (2004) suggested S. teuszii most likely inhabited the Niger Delta before the large-scale oil exploration and extraction altered the coastal environment.
Etymology: The species is named in honor of Edward Teusz, who collected the specimen that later became the type and donated it to Dr. Kükenthal at the Jena Natural History Museum. The English common name is the currently used Atlantic humpback dolphin.

Holotype and Type Locality: The holtype is a skull in the Muséum national d'Histoire naturelle, Paris as MNHN A-3053, but is also labeled with A-14378. Type locality is “Malabar,” northern Kerala, in southwestern India. The holotype skull is illustrated by drawings in van Beneden and Gervais (1880, plate XXXVII, fig. 1-5), and just the lateral view is reprinted in True (1889, plate 1, fig. 2). The holotype and syntypes are described in detail in Robineau (1990).

Distribution: This species is found in shallow waters from Muizenberg, False Bay, South Africa (Best 2007) to the Bay of Bengal, as far east as the Mergui Archipelago, southeastern Myanmar (Burma), including the Red Sea and Persian (Arabian) Gulf (Jefferson and Karczmarski 2001, Smith and Tun 2008) (Fig. 9). Occasional records of Sousa from as far north as Saldanha Bay have been recently reported from Southwest Africa.1 Range states with confirmed records include South Africa, Mozambique, Madagascar, the Comoros, Kenya, Tanzania, Somalia, Ethiopia, Oman, United Arab Emirates, Saudi Arabia, Djibouti, Bahrain, Egypt, Iran, Iraq, Kuwait, Qatar, Yemen, Pakistan, India, Sri Lanka, Bangladesh, and Myanmar (Burma). There is an extralimital record from Israel, where one individual recently passed through the Suez Canal into the Mediterrnean Sea (Kerem et al. 2001).
Etymology: The species name, plumbea, refers to the dark gray (plumbeous, or lead-colored) color of the body. The English common name is the Indian Ocean humpback dolphin, which accurately describes its range.

Holotype and Type Locality: Type locality is the “Canton River” (= Pearl River, People's Republic of China). There is no holotype, but a specimen was described and beautifully illustrated by Flower (1870). This individual was viewed as a kind of surrogate for a type specimen until its destruction in the Museum of the Royal College of Surgeons during a bombing raid in World War II (Pilleri 1979). Porter (2002) recently designated a neotype for Sousa chinensis (BMNH ZD 1999.360), but the male individual was only 5 yr of age, well below the age at which males reach sexual maturity, which is about 12–14 yr, and physical maturity—about 14–17 yr (see Jefferson et al. 2012). Therefore, as suggested by Jefferson and Van Waerebeek (2004), Porter's (2002) neotype may not have the characteristics typical of adults of the species, and on which taxonomic comparisons are usually made. Also, several errors were made in the description. Therefore, we emphasize that Porter's (2002) neotype description should not be used for comparative purposes without due consideration to these problems.

Distribution: This species is distributed in waters from central China (near the mouth of the Yangtze River), south throughout the waters of Southeast Asia as far southeast at least as Borneo, and as far west as the Orissa coast of India (Sutaria and Jefferson 2004). It overlaps in range with Sousa plumbea, although there is no convincing evidence of interbreeding between the two species. Range states include the People's Republic of China (including the SARs of Hong Kong and Macau), Taiwan (Republic of China), Vietnam, Cambodia, Thailand, Myanmar (Burma), Bangladesh, India, Indonesia, Malaysia, Singapore, and Brunei Darussalam.
Etymology: The species name, chinensis, refers to the original location of the animals observed by Osbeck, in the Canton (Pearl) River of southern China. We considered the Western Pacific humpback dolphin, but this is not accurate, as the species occurs in both the Indian and Pacific oceans. The suggested common name is therefore the currently used Indo-Pacific humpback dolphin, which accurately describes its range. 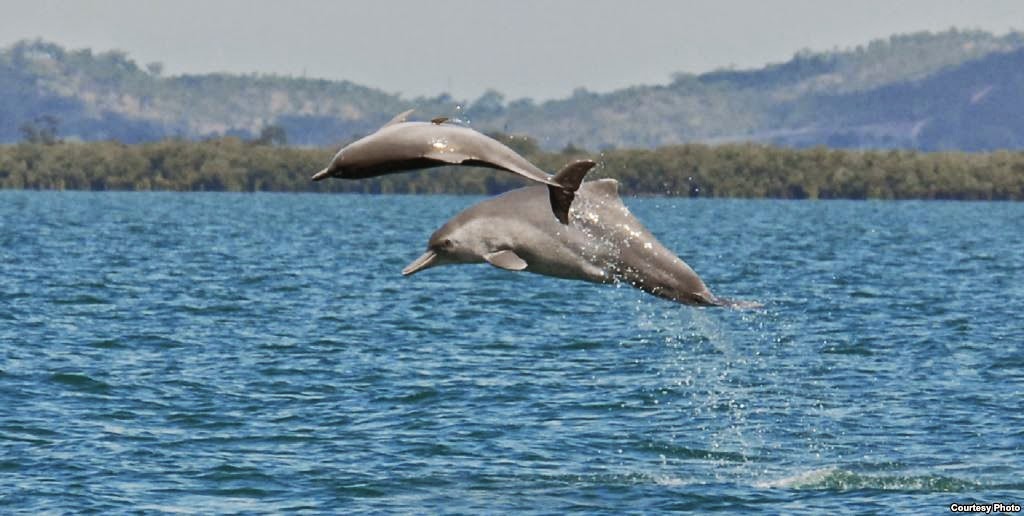 Holotype and Type Locality: The holtype is a complete skull in the Museum of Tropical Queensland (MTQ JM20036), collected on 23 June 1985 from Saunders Beach, northeast Queensland, Australia (19°09′20′′S, 146°36′26′′E). The skull is from an adult male specimen 227 cm in total length (CBL = 507 mm), and was measured by TAJ in June 2000 (measurements presented in Table 3). The skull of the holotype is illustrated in Figure 13. A bone sample from the type specimen has been obtained for genetic analysis and the mtDNA control region sequence will be deposited in GenBank. No paratypes are proposed.

Etymology: The species name, sahulensis, is based on the apparent range, over the Sahul Shelf extending between Australia and the island of New Guinea. The suggested common name is the Australian humpback dolphin, which refers to the main area of its known range, and the source of virtually all information available on this species to date.

Distribution: This species is found in the tropical/subtropical waters along the coast of northern Australia, from the Queensland/New South Wales border (31°27′S) to Ningaloo Reef, near Exmouth Bay (22°17′S; Parra et al. 2004). There are seven reliable records (supported by photographs) of humpback dolphins reported from near Kikori, Gulf of Papua, in southern Papua New Guinea in 2013.2 An additional two unconfirmed records have been reported from the same area.3 Therefore, humpback dolphins (apparently S. sahulensis) also occur in at least the southern waters of the island of New Guinea (as was suggested by Mitchell 1975 following Dawbin 1972, but with no details given). Generally, there is very little information available on marine mammal distribution in waters of far-eastern Indonesia and Papua New Guinea. There are reports of humpback dolphins (species unknown) from Bintuni-Berau Bay, West Papua/Irian Jaya, Indonesia (B. Kahn, in litt., 2006); however these must be considered unconfirmed, as detailed descriptions or photographs were not provided. Based on its apparent distribution, Sousa sahulensis is considered to be associated with the Sahul Shelf, which extends around Australia and connects to southern New Guinea. Known range states to date include Australia and Papua New Guinea, and may also include Indonesian portions of New Guinea (i.e., provinces of Papua and West Papua/Irian Jaya). 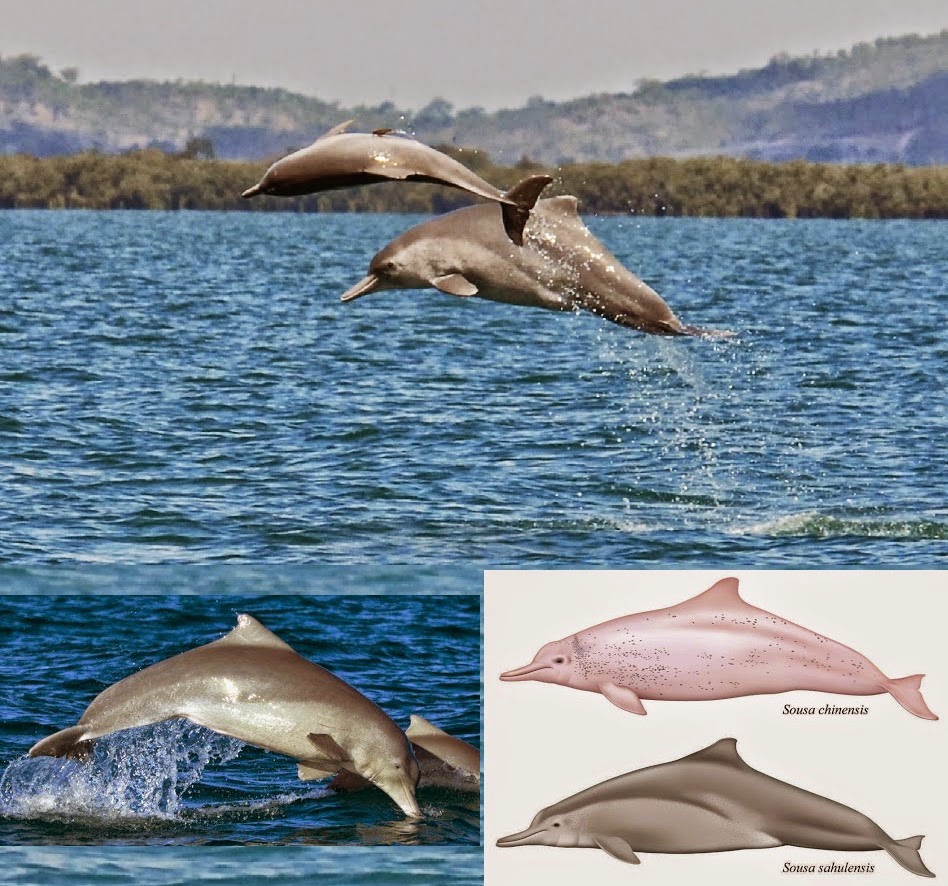