The Greater Mekong subregion in Southeast Asia risks losing more than a third of its remaining forest cover within the next two decades if regional governments fail to boost protection, value and restore natural capital, and embrace green growth, warns a new WWF report.

WWF’s analysis reveals the Greater Mekong has retained about 98 million hectares of natural forest, just over half of the region’s land area, but further rapid loss is expected if current deforestation rates persist.

Between 1973 and 2009, the five countries of the Greater Mekong lost just under one-third of their remaining forest cover. During this period, Cambodia lost 22 per cent of its 1973 forest cover, Laos and Myanmar lost 24 per cent, and Thailand and Vietnam lost 43 per cent.

Large connected areas of core forest also declined significantly across the region, from over 70 per cent in 1973 to about 20 per cent in 2009. 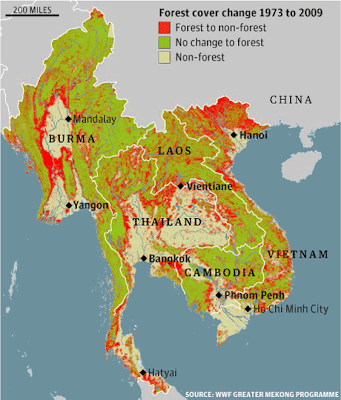 Core forest is defined as an area of at least 3.2km2 of uninterrupted forest. If current trends continue, WWF predicts that by 2030 only 14 per cent of the Greater Mekong’s remaining forest will consist of contiguous habitat capable of sustaining viable populations of many wildlife species.

“The Greater Mekong is at a crossroads,” said Peter Cutter, Landscape Conservation Manager with WWF-Greater Mekong. “One path leads to further declines in biodiversity and livelihoods, but if natural resources are managed responsibly, this region can pursue a course that will secure a healthy and prosperous future for its people.”

The report, “Ecosystems in the Greater Mekong: past trends, current status, possible futures,” provides new analysis on the current status and potential future of the region’s principal forest and freshwater ecosystems, and some of the most endangered species these ecosystems support.

The report offers two scenarios for the region’s ecosystems, one predicts what will likely happen by 2030 under an unsustainable growth model in which the deforestation and degradation observed over the past decade persists, while the other scenario assumes a 50 per cent cut in the annual deforestation rate and offers a future based on green growth. Under the green economy scenario, core forest areas extant in 2009 across the five Greater Mekong countries would remain intact.

“The green economy approach is the choice for a viable future in the Greater Mekong,” added Cutter. “Regional leaders have already affirmed that healthy economic growth goes hand in hand with healthy and productive ecosystems, but fast and effective responses are needed now to avoid permanent environmental degradation.” 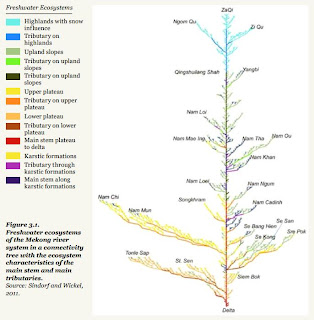 The report highlights the Xayaburi dam development as a key threat to the health and productivity of the Mekong river and delta.

The Mekong basin hosts 13 unique, yet connected, freshwater ecosystems, but the controversial Xayaburi project will sever the mainstem of the lower Mekong river, blocking migratory fish and sediment flow with devastating consequences for livelihoods and food security for 60 million people.

The report also maps the enormous decline in the range of several important and iconic species of the region, including the tiger, Asian elephant, Irrawaddy dolphin and the endemic saola.

The survival of many species in the Greater Mekong depend on the existence of effectively managed protected area systems, and while protected areas have expanded dramatically since 1970, many are not well managed.

“Many protected areas exist in name only,” added Cutter. “Even relatively secure protected areas are under intense pressure from poaching and timber theft, while others have been reduced in size by government’s eager to cash in on land concessions to mining companies or plantation owners.”

Despite documenting the degradation of ecosystems over the past 50 years, the report also emphasizes the region is still rich in natural resources and the value of its ecosystem services, including food, water and fibre, is among the highest in the world.

“Given that the majority of the region’s biological heritage and supporting ecosystems occur in landscapes that cross borders, regional collaboration is critical,” concluded Cutter. “Increased and more sustainable investment in maintaining ecosystem integrity must also be a priority at landscape, national, and regional scales."