[Paleontology • 2013] Caenagnathidae from the Upper Campanian Aguja Formation of West Texas, and a Revision of the Caenagnathinae


Caenagnathid theropods are a relatively common part of the theropod fauna in the Late Cretaceous of Asia and North America, but have not previously been described from the southernmost United States. Here, we describe caenagnathid fossils from the late Campanian Aguja Formation of West Texas, and revise the systematics of caenagnathids from the Campanian of North America. Caenagnathids from the late Campanian of Canada represent three species in three genera: Caenagnathus collinsi, Chirostenotes pergracilis and Leptorhynchos elegans gen. nov. Leptorhynchos is diagnosed by its small size, its short, deep mandible, and the upturned tip of the beak. A single caenagnathid is known from the late Campanian of Utah, Hagryphus giganteus. Two caenagnathid species occur in the Aguja Formation, ?Chirostenotes sp. and Leptorhynchos gaddisi sp. nov. L. gaddisi differs from L. elegans in that the tip of the beak is narrower and less upturned. Phylogenetic analysis recovers Caenagnathidae and Oviraptoridae as monophyletic sister taxa. Within Caenagnathidae, the North American species seem to form a monophyletic assemblage, the Caenagnathinae, within which Chirostenotes and Caenagnathus form a clade to the exclusion of Leptorhynchos. The discovery of Chirostenotes gaddisi provides more evidence for the existence of a distinct dinosaurian fauna in southern North America during the Campanian. Furthermore, the Aguja fossils show that caenagnathids were widespread and highly diverse in the Late Cretaceous of North America. This diversity was maintained in two ways. First, variation in body size and beak shape suggests that diversity within formations is maintained by niche partitioning, in a way analogous to Darwin's finches. Second, diversity is maintained by high degree of endemism, with different species of caenagnathids occurring in different habitats. 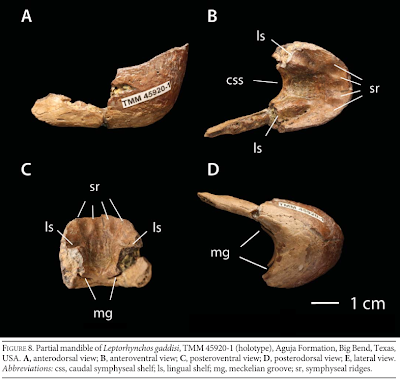 Feathered Dinos Were Diverse Like Darwin's Finches
Flightless feathered dinosaurs with parrotlike beaks and long, skinny claws that scampered around North America may have been the Darwin's finches of the Late Cretaceous era.
http://www.livescience.com/29190-feathered-dinosaur-diversity.html

Fossils of at least five species of vegetarian birdlike dinosaurs known as caenagnathids have been found from West Texas to Canada with wide variation in their beak shapes and body size, giving scientists clues about how the small creatures could coexist by carving out different dietary niches.

Charles Darwin's theory of evolution by natural selection was famously inspired by the diversity of beak shapes among finches on the Galapagos Islands, which he took as a sign that the birds had somehow adapted to the specific environments where they lived. More recent research has shown that Darwin's finches can evolve quite quickly. For instance, one species shrunk its beak size to better compete with another bird for small seeds in a mere two decades. 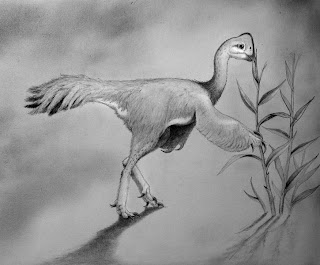 Millions of years ago, different species of caenagnathids may have similarly adjusted their beak size across western North America.

"Each species has a different beak structure. You could have a lot of different species in one environment, because they ate different kinds of foods, which is how different species of Darwin's finches coexist," Nicholas R. Longrich, a postdoctoral researcher at Yale University, said in a statement. "So, in a way, the evolution of modern dinosaurs — birds — provides insight into ancient, extinct dinosaurs."

Fossil collectors in Texas recently found a new species of the turkey-sized dinosaur, dubbed Leptorhynchos gaddisi, in the Aguja Formation near Big Bend National Park. The 75-million-year-old remains of this species suggest it had a more rounded chin and a less upturned beak than its Canadian relative, Leptorhynchos elegans. The short deep mandible of the new species also suggests it ate tougher, more fibrous plants than its neighbors known as Chirostenotes and Caenagnathus, researchers say. 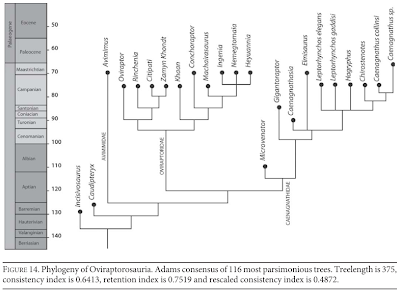 "These are subtle differences, but they mean we're dealing with different species," Longrich said. "If you look at modern birds, one of the things that distinguishes a crow from a raven, or two types of albatrosses from each other, is the beak proportions. We can do the same thing with dinosaurs that we do with modern birds, and identify them using beak shapes."

Considering that small dinosaurs have a poor fossil record in North America, having at least five known specialized species of caenagnathids — some of them living side-by-side — suggests the group had relatively high diversity, the researchers say.

An Oviraptorosaur Worth the Name?
http://qilong.wordpress.com/2013/04/25/an-oviraptorosaur-worth-the-name/