Relative to large-bodied dinosaurs, the diversity of small-bodied dinosaurs from the Campanian of North America is poorly understood due to a lack of well-preserved skeletons. We document the first articulated remains, as well as the first cranial bones, of non-iguanodontian ornithopods from the Belly River Group of Alberta. The geologically oldest specimen consists of the posterior half of an articulated skeleton from the middle unit of the Oldman Formation and shares many anatomical features with the contemporaneous Orodromeus makelai and the older Oryctodromeus cubicularis. A second, younger specimen from the upper Oldman Formation is distinct from other ornithopods in having a reduced distal portion of the fibula that is fused to the anterior surface of the tibia; it is designated as the type of a new taxon, Albertadromeus syntarsus, gen. et sp. nov. Numerous isolated elements from small ornithopods from the Dinosaur Park Formation are also identified, but cannot be assigned to the generic level with confidence. Although small-bodied ornithopod material is rare, their known postcranial material outnumbers those of taphonomically equivalent and contemporaneous pachycephalosaurs, which are known to be abundant and diverse due to their robust and frequently recovered cranial domes. These findings suggest considerable undiscovered diversity of small-bodied ornithopods, and highlight biases against the preservation of small taxa in this system.

Type Species — Albertadromeus syntarsus, sp. nov.
Generic Etymology — Alberta (Canadian Province) and ‘dromeus’ (runner, Greek): ‘Alberta’ honors the Canadian province of Alberta where the only remains of the animal are currently known, and ‘dromeus,’ from the Greek for the inferred cursorial nature of this animal.
Diagnosis — As for type and only species. 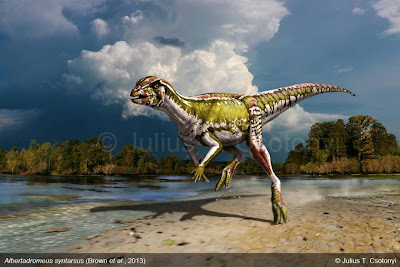 — Dinosaurs are often thought of as large, fierce animals, but new research highlights a previously overlooked diversity of small dinosaurs. In the Journal of Vertebrate Paleontology, a team of paleontologists from the University of Toronto, Royal Ontario Museum, Cleveland Museum of Natural History and University of Calgary have described a new dinosaur, the smallest plant-eating dinosaur species known from Canada. Albertadromeus syntarsus was identified from a partial hind leg, and other skeletal elements, that indicate it was a speedy runner. Approximately 1.6 m (5 ft) long, it weighed about 16 kg (30 lbs), comparable to a large turkey.

Albertadromeus lived in what is now southern Alberta in the Late Cretaceous, about 77 million years ago. Albertadromeus syntarsus means "Alberta runner with fused foot bones." Unlike its much larger ornithopod cousins, the duckbilled dinosaurs, its two fused lower leg bones would have made it a fast, agile two-legged runner. This animal is the smallest known plant-eating dinosaur in its ecosystem, and researchers hypothesize that it used its speed to avoid predation by the many species of meat-eating dinosaurs that lived at the same time.
Albertadromeus was discovered in 2009 by study co-author David Evans of the Royal Ontario Museum as part an on-going collaboration with Michael Ryan of the Cleveland Museum of Natural History to investigate the evolution of dinosaurs in the Late Cretaceous of North America. The known dinosaur diversity of this time period is dominated by large bodied plant-eating dinosaurs.