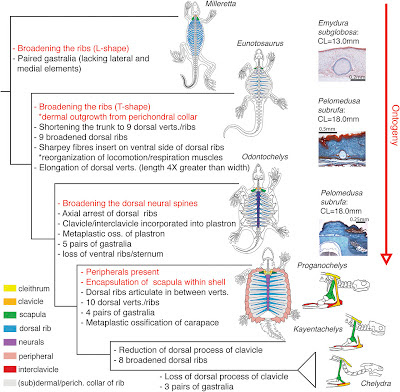 Summary
The origin of the turtle shell has perplexed biologists for more than two centuries. It was not until Odontochelys semitestacea was discovered, however, that the fossil and developmental data could be synthesized into a model of shell assembly that makes predictions for the as-yet unestablished history of the turtle stem group. We build on this model by integrating novel data for Eunotosaurus africanus—a Late Guadalupian (∼260 mya) Permian reptile inferred to be an early stem turtle. Eunotosaurus expresses a number of relevant characters, including a reduced number of elongate trunk vertebrae (nine), nine pairs of T-shaped ribs, inferred loss of intercostal muscles, reorganization of respiratory muscles to the ventral side of the ribs, (sub)dermal outgrowth of bone from the developing perichondral collar of the ribs, and paired gastralia that lack both lateral and median elements. These features conform to the predicted sequence of character acquisition and provide further support that E. africanus, O. semitestacea, and Proganochelys quenstedti represent successive divergences from the turtle stem lineage. The initial transformations of the model thus occurred by the Middle Permian, which is congruent with molecular-based divergence estimates for the lineage, and remain viable whether turtles originated inside or outside crown Diapsida.

Evolutionary Developmental Model for the Origin of the Turtle Shell

“Results of a phylogenetic analysis of shelled reptiles and characters important in constructing a shell are plotted against the ontogeny of pleurodire turtles. Thin sections through turtle embryos show the initial outgrowth of (sub)dermal bone through the costals first (carapace length [CL] = 13.0mm in the pleurodire Emydura subglobosa) and then the neurals (CL = 18.0 mm in the pleurodire Pelomedusa subrufa). The timing of ontogenetic transformations of those features (in red) important in the construction of the shell (i.e., the number of dorsal vertebrae or ribs does not change through ontogeny) is congruent with the phylogenetic transformation of those same features based on our recovered tree topology. Our model makes explicit morphological and histological predictions for the lineage prior to the most recent common ancestor of Eunotosaurus africanus and turtles that are met by the morphology found in Milleretta rubidgei. Numbers above each node represent bootstrap frequencies obtained in the phylogenetic analysis.”

How the turtle got its unique hard shell
http://news.yale.edu/2013/05/30/how-turtle-got-its-shell