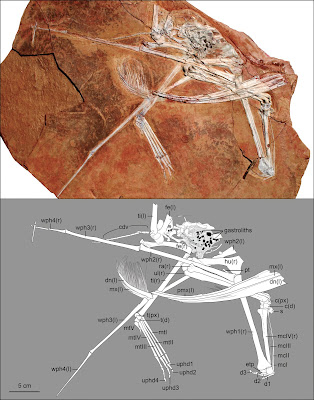 Two nearly complete skeletons of the filter-feeding pterodactyloid Pterodaustro guinazui from the Lower Cretaceous of Argentina exhibit clusters of poorly sorted coarse sand to fine gravel inside the abdominal cavity. These stones are interpreted as ingested gastroliths (geogastroliths), which are commonly found in a variety of archosaurs (including birds) but have never before been reported in a pterosaur. The geogastroliths found in these Pterodaustro specimens are interpreted as having assisted in the digestion of hard food items such as ‘shelled’ crustaceans that are abundant in the fossil beds of this pterosaur. One of these specimens with geogastroliths has anterior mandibular teeth that are notably thicker than the posterior teeth and are somewhat procumbent. We suggest that these teeth might have facilitated the apprehension of fine gravel.