Taphonomic biases dictate how organisms are represented in the fossil record, but their effect on studies of vertebrate diversity dynamics is poorly studied. In contrast to the high diversity and abundance of small-bodied animals in extant ecosystems, small-bodied dinosaurs are less common than their large-bodied counterparts, but it is unclear whether this reflects unique properties of dinosaurian ecosystems or relates to taphonomic biases. A new, fully domed pachycephalosaurid dinosaur, Acrotholus audeti, from the Santonian of Alberta predates incompletely domed taxa, and provides important new information on pachycephalosaur evolution and the completeness of the ornithischian fossil record. Here we provide the first empirical evidence that the diversity of small-bodied ornithischian dinosaurs is strongly underestimated based on ghost lineages and the high proportion of robust and diagnostic frontoparietal domes compared with other pachycephalosaur fossils. This suggests preservational biases have a confounding role in attempts to decipher vertebrate palaeoecology and diversity dynamics through the Mesozoic.
Subject terms: Biological sciences, Evolution Palaeontology 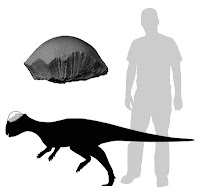