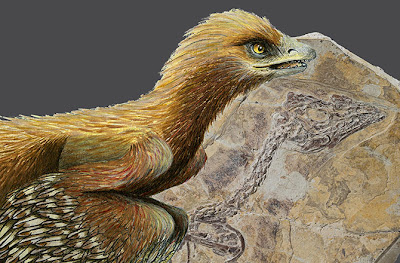 The recent discovery of small paravian theropod dinosaurs with well-preserved feathers in the Middle–Late Jurassic Tiaojishan Formation of Liaoning Province (northeastern China) has challenged the pivotal position of Archaeopteryx regarded from its discovery to be the most basal bird. Removing Archaeopteryx from the base of Avialae to nest within Deinonychosauria implies that typical bird flight, powered by the forelimbs only, either evolved at least twice, or was subsequently lost or modified in some deinonychosaurians. Here we describe the complete skeleton of a new paravian from the Tiaojishan Formation of Liaoning Province, China. Including this new taxon in a comprehensive phylogenetic analysis for basal Paraves does the following: (1) it recovers it as the basal-most avialan; (2) it confirms the avialan status of Archaeopteryx; (3) it places Troodontidae as the sister-group to Avialae; (4) it supports a single origin of powered flight within Paraves; and (5) it implies that the early diversification of Paraves and Avialae took place in the Middle–Late Jurassic period.

Etymology. Aurora, Latin for daybreak, dawn; Ornis, Greek for bird; xui, in honour of Xu Xing, for his exceptional and continuing contribution to our understanding of the evolution and biology of feathered dinosaurs.

New Bird-Like Dinosaur Settles Origins of Flight
A new species found in China has shed light on the answer. The two-foot long Aurornis xui, the “daybreak bird,” fleshes out the relationships between bird-like dinosaurs and, along with its cousin species Archaeopteryx and Anchiornis, restores its lineage as the likely predecessors of birds.
...........
http://bit.ly/118FJ9F  via @DiscoverMag
http://news.discovery.com/animals/dinosaurs/aurornis-oldest-known-bird-pictures-130529.htm 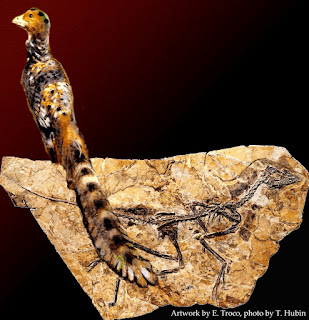