Northern South America and South East Asia are today’s hotspots of crocodylian diversity with up to six (mainly alligatorid) and four (mainly crocodylid) living species respectively, of which usually no more than two or three occur sympatrically. In contrast, during the late Miocene, 14 species existed in South America. Here we show a diversity peak in sympatric occurrence of at least seven species, based on detailed stratigraphic sequence sampling and correlation, involving four geological formations from the middle Miocene to the Pliocene, and on the discovery of two new species and a new occurrence. This degree of crocodylian sympatry is unique in the world and shows that at least several members of Alligatoroidea and Gavialoidea coexisted. By the Pliocene, all these species became extinct, and their extinction was probably related to hydrographic changes linked to the Andean uplift. The extant fauna is first recorded with the oldest Crocodylus species from South America.

14 closely related crocodiles existed around 5 million years ago
14 species of crocodile lived in South America around 5 million years ago, at least seven of which populated the coastal areas of the Urumaco River in Venezuela at the same time. Paleontologists from the University of Zurich have found evidence of an abundance of closely related crocodiles that remains unparalleled to this day. As they were highly specialized, the crocodiles occupied different eco-niches. When the watercourses changed due to the Andean uplift, however, all the crocodile species became extinct.

While studying the wealth of fossil crocodiles from the Miocene in the Urumaco region, the scientists discovered two new crocodile species: the Globidentosuchus brachyrostris, which belonged to the caiman family and had spherical teeth, and Crocodylus falconensis, a crocodile that the researchers assume grew up to well over four meters long. As Sánchez and his team reveal, Venezuela's fossils include all the families of crocodile species that still exist all over the world today: the Crocodylidae, the so-called true crocodiles; the Alligatoridae, which, besides the true alligators, also include caimans; and the Gavialidae, which are characterized by their extremely long, thin snouts and are only found in Southeast Asia nowadays.

On account of the species' extremely different jaw shapes, the researchers are convinced that the different crocodilians were highly specialized feeders: With their pointed, slender snouts, the fossil gharials must have preyed on fish. "Gharials occupied the niche in the habitat that was filled by dolphins after they became extinct," Sánchez suspects. With its spherical teeth, however, Globidentosuchus brachyrostris most likely specialized in shellfish, snails or crabs. And giant crocodiles, which grew up to 12 meters long, fed on turtles, giant rodents and smaller crocodiles. "There were no predators back then in South America that could have hunted the three-meter-long turtles or giant rodents. Giant crocodiles occupied this very niche," explains Scheyer.

The unusual variety of species in the coastal and brackish water regions of Urumaco and Amazonas came to an end around 5 million years ago when all the crocodile species died out. The reason behind their extinction, however, was not temperature or climate changes – temperatures in the Caribbean remained stable around the Miocene/Pliocene boundary. Instead, it was caused by a tectonic event: "The Andean uplift changed the courses of rivers. As a result, the Amazon River no longer drains into the Caribbean, but the considerably cooler Atlantic Ocean," explains Sánchez. With the destruction of the habitat, an entirely new fauna emerged that we know from the Orinoco and Amazon regions today. In the earlier Urumaco region, however, a very dry climate has prevailed ever since the Urumaco River dried up. 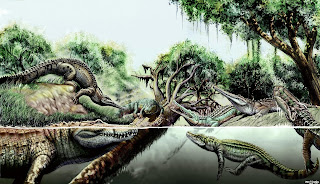