Abstract
Carnivoran-dominated fossil sites provide precious insights into the diversity and ecology of species rarely recovered in the fossil record. The lower level assemblage of Batallones-1 fossil site (Late Miocene; Madrid Basin, Spain) has yielded one of the most abundant and diversified carnivoran assemblage ever known from the Cenozoic record of mammals. A comprehensive taphonomic study is carried out here in order to constrain the concentration mode of this remarkable assemblage. Another distinctive feature of Batallones-1 is that the accumulation of carnivoran remains took place in the context of a geomorphological landform (cavity formation through a piping process) practically unknown in the generation of fossil sites. Two characteristics of the assemblage highly restrict the probable causes for the accumulation of the remains: (1) the overwhelming number of carnivorans individuals; and (2) the mortality profiles estimated for the four most abundant taxa do not correspond to the classic mortality types but rather were the consequence of the behavior of the taxa. This evidence together with other taphonomic data supports the hypothesis that carnivoran individuals actively entered the cavity searching for resources (food or water) and were unable to exit. The scarcity of herbivores implies that the shaft was well visible and avoided by these taxa. Fossil bones exhibit a very good preservation state as a consequence of their deposition in the restricted and protective environment of the chamber. Batallones-1 had another assemblage (upper level assemblage) that was dominated by herbivore remains and that potentially corresponded to the final stages of the cavity filling.

Killer Cave Lured Ancient Carnivores to Their Death
A cavern in Spain may have lured ancient carnivores to their deaths by offering the promise of food and water, new research suggests.

The new study, published in the journal PLOS ONE, may explain how the carcasses of several carnivore species, including saber-toothed cats and "bear dogs," wound up in an underground cavern millions of years ago.

"Only the carnivores were daring enough to enter," said study co-author M. Soledad Domingo, a paleontologist at the University of Michigan. "But they were unable to make their way out."

Surprise discovery
In 1991, miners drilling about 18.7 miles (30 kilometers) outside Madrid, Spain, uncovered animal bones and called in local paleontologists to excavate. They uncovered a series of underground caverns full of animal fossils — including the remains of red pandas, bear dogs and saber-toothed cats, as well as ancient animals related to modern elephants, giraffes, rhinoceroses and horses. To date, nearly 18,000 fossils have been recovered from the area.

The so-called Cerro de los Batallones caves formed between 9 million and 10 million years ago in a process known as piping, where sediment falls into cracks or fissures in the surface, carving out hollow spaces in the soft, claylike Earth. Unlike other "pipes" formed in clay that quickly disappear, however, the holes stayed open longer because the area also contained a harder type of rock to buttress the burgeoning caves.

Exactly what happened to the animals, however, remained a mystery.

Cave of death
To solve the mystery, Domingo and her colleagues systematically analyzed all the bones discovered in the bottom level of the site, called Batallones-1. The cave contained an unusually high proportion of carnivores, some of which were completely unknown before the cave's discovery, Domingo told LiveScience.

The researchers found that nearly 98 percent of the large-mammal fossils were of carnivores, many of them healthy young adults. They also studied the orientation of the skeletons in the cave and the lack of trample marks.

Based on these findings, the team concluded that the cave probably had a visible opening in the ground, into which the herbivores may have occasionally fallen. (For instance, the cave contains a complete rhinoceros skeleton.) However, most of the herbivores were smart enough to avoid the trap.

But young-adult carnivores willingly entered the cave, possibly lured by the scent of food or water. The unlucky animals became trapped and died (likely from starvation), and the scent of their rotting carcasses lured other carnivores into the caves, and to their deaths.

"We think that the carnivores were getting trapped, and then they became additional food for another coming carnivore," Domingo said.

The researchers still don't know how long the cave was open before flooding brought fresh material to cover it up. And the findings only apply to one cavern at the site — scientists still need to do further studies to determine how herbivores wound up in the upper levels of the cave complex. 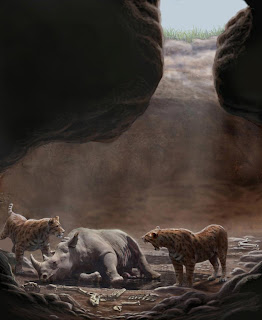