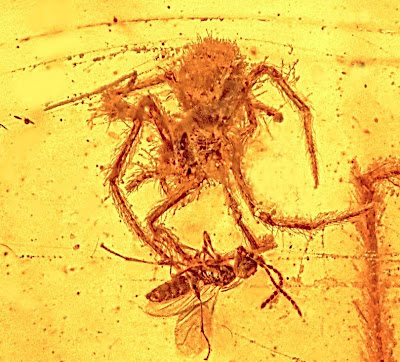 Abstract
The present work shows predatory behaviour of the social orb-weaver spider, Geratonephila burmanica n. gen., n. sp. (Araneae: Nephilidae) against a parasitic wasp, Cascoscelio incassus n. gen., n. sp. (Hymenoptera: Platygastridae) in Early Cretaceous Burmese amber. An adult male and juvenile of G. burmanica in the same web provide the first fossil evidence of sociality in spiders. The spider is characterised by a pedipalp with a hemispherical tegulum, a subtegulum curved at 180°and an apical spiralled embolas-conductor bent approximately 45°at midpoint. The male wasp is characterised by an ocellar tubercle, 12-segmented antennae with a feeble five-segmented clava, thick sensilla trichodea curvata with rounded ends on the claval antennomeres, a short uncus, a short post-marginal vein and a nebulose radial sector (Rs) vein extending from the uncus to the costal margin of the forewing. This is the first fossil evidence of spider sociality and a fossil spider attacking prey trapped in its web. 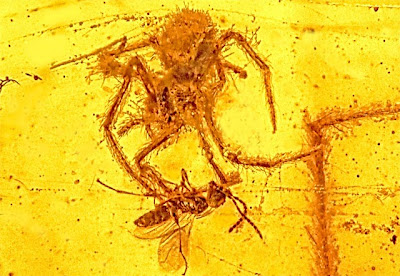 This piece of amber preserved the event in remarkable detail, an action that took place some 100 million years ago in the Hukawng Valley of Myanmar.

The fossil also contains the body of a male spider in the same web. This provides the oldest evidence of social behavior in spiders, which still exists in some species but is fairly rare. Most spiders have solitary, often cannibalistic lives, and males will not hesitate to attack immature species in the same web.

“This juvenile spider was going to make a meal out of a tiny parasitic wasp, but never quite got to it,” said Prof George Poinar Jr. of the Oregon State University and world expert on insects trapped in amber, who co-authored a paper in the Historical Biology: An International Journal of Paleobiology.

“This was a male wasp that suddenly found itself trapped in a spider web,” Prof Poinar said. “This was the wasp’s worst nightmare, and it never ended. The wasp was watching the spider just as it was about to be attacked, when tree resin flowed over and captured both of them.”

“Spiders are ancient invertebrates that researchers believe date back some 200 million years, but the oldest fossil evidence ever found of a spider web is only about 130 million years old. An actual attack such as this between a spider and its prey caught in the web has never before been documented as a fossil,” the researcher said.

The tree resin that forms amber is renowned for its ability to flow over insects, small plants and other life forms, preserving them in near perfection before it later turns into a semi-precious stone. It often gives scientists a look into the biology of the distant past. This spider, which may have been waiting patiently for hours to capture some prey, was smothered in resin just a split second before its attack.

“This type of wasp,” Prof Poinar said, “belongs to a group that is known today to parasitize spider and insect eggs. In that context, the attack by the spider, an orb-weaver, might be considered payback.”

Both the spider and the wasp belong to extinct genera. At least 15 unbroken strands of spider silk run through the amber piece, and on some of these the wasp was ensnared. 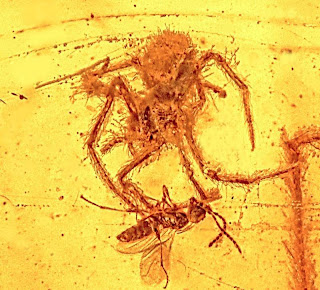