Viviparity is known in several clades of Mesozoic aquatic reptiles, but evidence for it is lacking in the Plesiosauria. Here, we report a Late Cretaceous plesiosaur fossil consisting of a fetus preserved within an adult of the same taxon. We interpret this occurrence as a gravid female and unborn young and hence as definitive evidence for plesiosaur viviparity. Quantitative analysis indicates that plesiosaurs gave birth to large, probably single progeny. The combination of viviparity, large offspring size, and small brood number differs markedly from the pattern seen in other marine reptiles but does resemble the K-selected strategy of all extant marine mammals and a few extant lizards. Plesiosaurs may have shared other life history traits with these clades, such as sociality and maternal care. 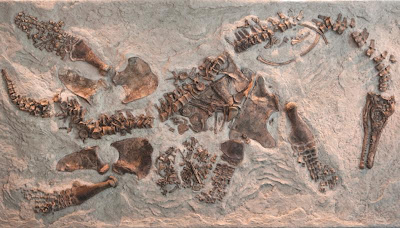