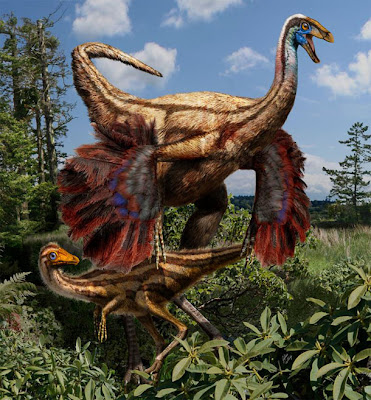 Previously described feathered dinosaurs reveal a fascinating record of feather evolution, although substantial phylogenetic gaps remain. Here we report the occurrence of feathers in ornithomimosaurs, a clade of non-maniraptoran theropods for which fossilized feathers were previously unknown. The Ornithomimus specimens, recovered from Upper Cretaceous deposits of Alberta, Canada, provide new insights into dinosaur plumage and the origin of the avian wing. Individuals from different growth stages reveal the presence of a filamentous feather covering throughout life and winglike structures on the forelimbs of adults. The appearance of winglike structures in older animals indicates that they may have evolved in association with reproductive behaviors. These specimens show that primordial wings originated earlier than previously thought, among non-maniraptoran theropods.

The ostrich-like dinosaurs in the original Jurassic Park movie were portrayed as a herd of scaly, fleet-footed animals being chased by a ferocious Tyrannosaurus rex. New research published in the prestigious journal Science reveals this depiction of these bird-mimic dinosaurs is not entirely accurate —ornithomimids, as they are scientifically known, should have had feathers and wings.

The new study, led by paleontologists Darla Zelenitsky from the University of Calgary and François Therrien from the Royal Tyrrell Museum of Palaeontology, describes the first ornithomimid specimens preserved with feathers, recovered from 75 million-year-old rocks in the badlands of southern Alberta, Canada. This discovery represents the first feathered dinosaur specimens found in the Western Hemisphere.

"Despite the many ornithomimid skeletons known, these specimens are the first to reveal that ornithomimids were covered in feathers, like several other groups of theropod dinosaurs," says Zelenitsky, assistant professor at the University of Calgary and lead author of the study. Until now, the absence of feathers in previously discovered ornithomimid specimens has been a mystery. It was not known if these animals were simply featherless in life or if feathers were just not preserved in these other specimens."

The researchers found evidence of feathers preserved with a juvenile and two adults skeletons of Ornithomimus, a dinosaur that belongs to the group known as ornithomimids. Like other groups of theropod dinosaurs, such as tyrannosaurs and raptors, ornithomimid dinosaurs would also have been covered in feathers. 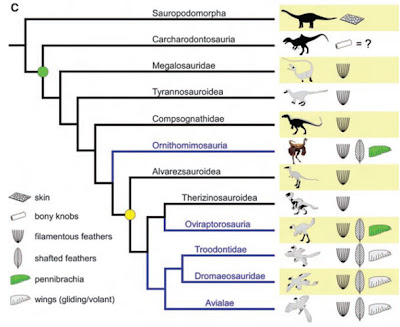 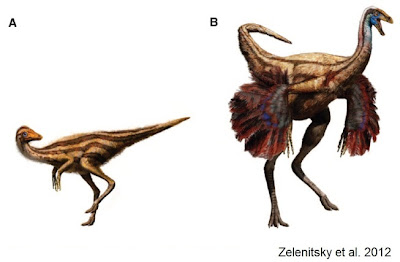 The specimens reveal an interesting pattern of change in feathery plumage during the life of Ornithomimus. "This dinosaur was covered in down-like feathers throughout life, but only older individuals developed larger feathers on the arms, forming wing-like structures," says Zelenitsky. "This pattern differs from that seen in birds, where the wings generally develop very young, soon after hatching."

This discovery of early wings in dinosaurs too big to fly indicates the initial use of these structures was not for flight. "The fact that wing-like forelimbs developed in more mature individuals suggests they were used only later in life, perhaps associated with reproductive behaviors like display or egg brooding," says Therrien, curator at the Royal Tyrrell Museum and co-author of the study. " Such a idea for the role of early wing feathers has been proposed previously, although fossil evidence was lacking until now."

Because sandstone is the type of rock that most commonly preserves dinosaur skeletons, the Canadian discoveries reveal great new potential for the recovery of feathered dinosaurs in North America and elsewhere. 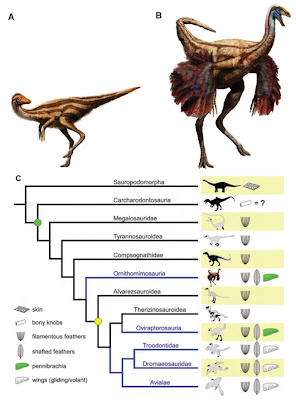 A new feathered dinosaur shows we still have lots to learn http://gu.com/p/3bcy6/tw
http://theropoda.blogspot.com/2012/10/coming-soon-finalmente-ornithomimidi.html