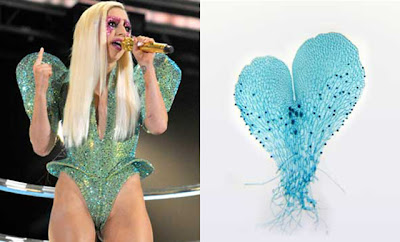 Lady Gaga and the fern gametophyte.


Abstract
Ongoing molecular phylogenetic studies of cheilanthoid ferns confirm that the genus Cheilanthes (Pteridaceae) is polyphyletic. A monophyletic group of species within the hemionitid clade informally called the “C. marginata group“ is here shown to be distinct from its closest relatives (the genus Aspidotis) and phylogenetically distant from the type species of Cheilanthes. This group is here segregated from Cheilanthes as the newly described genus, Gaga. In this study, we use molecular data from four DNA regions (plastid: matK, rbcL, trnG-R; and nuclear: gapCp) together with spore data to circumscribe the morphological and geographical boundaries of the new genus and investigate reticulate evolution within the group. Gaga is distinguished from Aspidotis by its rounded to attenuate (vs. mucronate) segment apices, minutely bullate margins of mature leaves (vs. smooth at 40×), and less prominently lustrous and striate adaxial blade surfaces. The new genus is distinguished from Cheilanthes s. s. by its strongly differentiated, inframarginal pseudoindusia, the production of 64 small or 32 large spores (vs. 32 small or 16 large) per sporangium, and usually glabrous leaf blades. A total of nineteen species are recognized within Gaga; seventeen new combinations are made, and two new species, Gaga germanotta and Gaga monstraparva, are described. 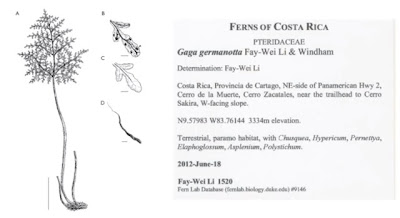 Pop music megastar Lady Gaga is being honored with the name of a new genus of ferns found in Central and South America, Mexico, Arizona and Texas. A genus is a group of closely related species; in this case, 19 species of ferns will carry the name Gaga.

At one stage of its life, the new genus Gaga has somewhat fluid definitions of gender and bears a striking resemblance to one of Gaga's famous costumes. Members of the new genus also bear a distinct DNA sequence spelling GAGA.

Two of the species in the Gaga genus are new to science: Gaga germanotta from Costa Rica is named to honor the family of the artist, who was born Stefani Germanotta. And a newly discovered Mexican species is being dubbed Gaga monstraparva (literally monster-little) in honor of Gaga's fans, whom she calls â€œlittle monsters.â€

"We wanted to name this genus for Lady Gaga because of her fervent defense of equality and individual expression," said study leader Kathleen Pryer, a Duke University biology professor and director of the Duke Herbarium. "And as we started to consider it, the ferns themselves gave us more reasons why it was a good choice."

For example, in her performance at the 2010 Grammy Awards, Lady Gaga wore a heart-shaped Armani Prive' costume with giant shoulders that looked, to Pryer's trained eyes, exactly like the bisexual reproductive stage of the ferns, called a gametophyte. It was even the right shade of light green. The way the fern extends its new leaves in a clenched little ball also reminds Pryer of Gaga's claw-like "paws up" salute to her fans.

The clincher came when graduate student Fay-Wei Li scanned the DNA of the ferns being considered for the new genus. He found GAGA spelled out in the DNA base pairs as a signature that distinguishes this group of ferns from all others.

Celebrity species abound in science. There's a California lichen named for President Barack Obama and a meat-eating jungle plant named for actress Helen Mirren. In January, an Australian horse fly described by its discoverer as "bootylicious" was named for singer Beyonce. 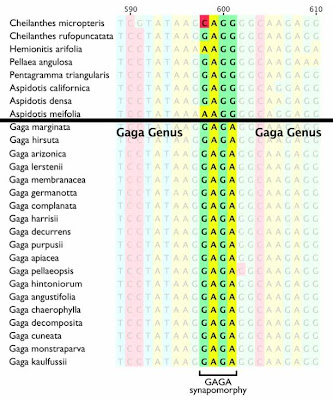 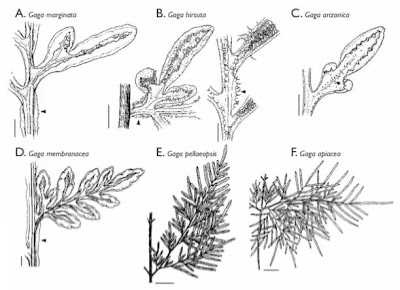 But those are just individual species. This is an entire genus that so far includes 19 species of ferns.

Except for the two new species, germanotta and monstraparva, the rest of the Gaga ferns are species that are being reclassified by Pryer and her co-authors. They had previously been assigned to the genus Cheilanthes based on their outward appearance. But Li's painstaking analysis of DNA using more than 80 museum specimens and newly collected plants showed they're distinct and deserving of their own genus.

Like most ferns, the Gaga group is "homosporous." They produce tiny spherical spores that drift to the ground and germinate into heart-shaped plants called gametophytes. These independent little organisms can be female, male or even bisexual, depending on growth conditions and what other kinds of gametophytes are around. When conditions are right, they exchange sperm between gametophytes, but when necessary they sometimes can also self-fertilize to produce a new fern.

"The biology of these ferns is exceptionally obscure and blurred by sexual crossing between species," Pryer said. "They have high numbers of chromosomes and asexuality that can lead to offspring that are genetically identical to the parent plant." 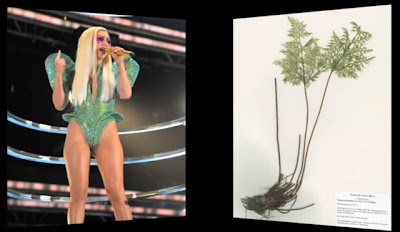 Pryer freely admits that she and her lab are big Gaga fans. "We often listen to her music while we do our research. We think that her second album, 'Born this Way,' is enormously empowering, especially for disenfranchised people and communities like LGBT, ethnic groups, women -- and scientists who study odd ferns!" Pryer said.

"What a remarkable, unexpected, perfect tribute to name a genus of ferns for Lady Gaga," said Duke faculty member Cathy N. Davidson, who was involved in the MacArthur Foundation's Digital Media and Learning Initiative that helped Lady Gaga to create the Born This Way Foundation, a national anti-bullying initiative.  "Encouraging her fans and kids everywhere to be brave, bold, unique, creative and smart is what Lady Gaga is about," Davidson says. "It's rare that a celebrity so young gives back so much to society."

A total of nineteen species are recognized within Gaga; seventeen new combinations are made, and two new species, Gaga germanotta and Gaga monstraparva, are described.