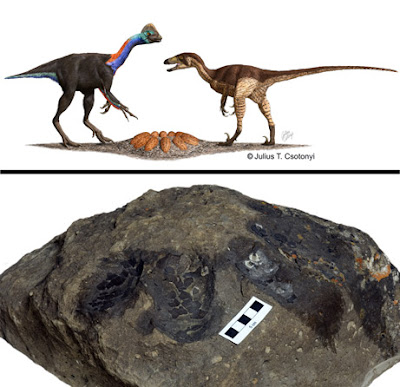 Abstract
Egg clutches of non-avian maniraptoran theropods (Dinosauria) are rare, particularly in North America where those of Troodon formosus are the only maniraptoran clutches known. Here we describe a new partial maniraptoran clutch and nesting trace referred to Montanoolithus strongorum oogen. et oosp. nov. (Montanoolithidae oofam. nov.), from the Upper Cretaceous Two Medicine Formation of Montana. Based on a cladistic analysis of reproductive traits, we infer that this clutch belonged either to a caenagnathid or to a dromaeosaurid, which makes it the first clutch known of either taxon. This specimen preserves impressions and eggshell fragments of at least five eggs on a nest structure. The eggs are asymmetrical, paired, and lay radially in a ring configuration on the sloped sides of a bioturbated, flat-topped sandstone mound. Geology of the locality indicates the female nested in a poorly-vegetated area of freshly deposited sand, possibly near an active river channel. This clutch reveals that the egg-layer of Montanoolithus strongorum had a unique suite of reproductive characteristics and nesting behaviours among maniraptorans.

If it looks like a duck-billed dinosaur nest, it's probably from a duck-bill—unless it's a newly identified clutch of fossilized eggs from a private collection in Calgary, Canada.

The eggs, originally found in Montana in the 1990s, actually belong to a carnivorous dinosaur—either a creature related to the fearsome velociraptor (seen above, top right) or a birdlike, upright-walking dinosaur called a caenganathid (top left), a new study says.

Nests for neither of the predators have never been found, making the discovery a major one, according to University of Calgary paleontologist Darla Zelenitsky, who led the study in the journal Paleontology.

When Zelenitsky and colleagues first examined the eggs, they noticed some irregularities that did not point to plant-eating duck-bills, which are not directly related to birds. (See a duck-bill illustration.)

For one, the ancient parents left their eggs open to the elements, probably so the creatures could brood their young as a bird would. The eggs were also pointed, like bird eggs.

The nest is also the first to be found that preserves the mound (above, bottom) on which the eggs were laid, added Zelenitsky. 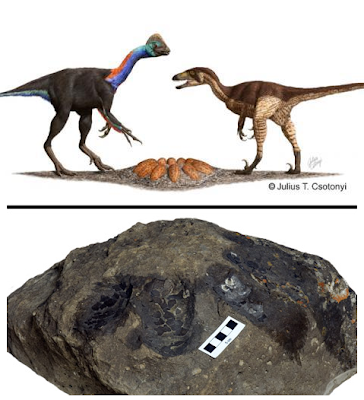