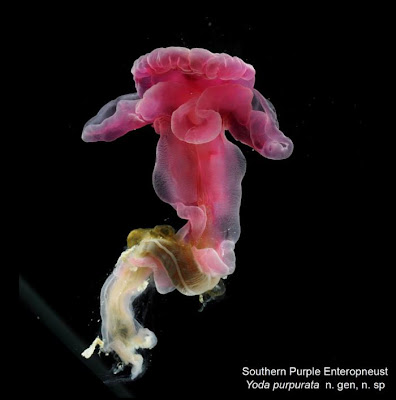 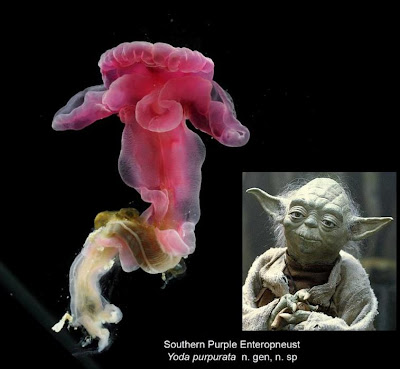 Abstract
Enteropneusts in the family Torquaratoridae were imaged using still and video cameras in the deep North Atlantic and then collected by remotely operated vehicles. From this material, we describe Yoda purpurata n. gen, n. sp., Tergivelum cinnabarinum n. sp., and Allapasus isidis n. sp. Individuals of the first two species were browsing completely exposed on the sea floor, whereas the specimen of the last species was encountered floating ~1 m above the sea floor. Living specimens of Y. purpurata were 12–19 cm long and had a dark reddish-purple proboscis, collar, and genital wings (folded dorsally over the anterior region of the trunk). Members of this species were hermaphrodites (the first ever discovered in the phylum Hemichordata), with numerous separate testes and ovaries in the genital wings. Living specimens of T. cinnabarinum were 12–26 cm long and had a cinnabar-colored proboscis, collar, and back veils (arising from the anterior region of the trunk); sexes were separate, and body shape and internal morphology closely resemble those of its brown congener, T. baldwinae, from the eastern Pacific. The only specimen of A. isidis collected was a male 13 cm long and pale yellow when alive. Its body shape was proportionally shorter and broader than that of its orange congener, A. aurantiacus, from the eastern Pacific, but the internal anatomy of the two species is virtually identical. 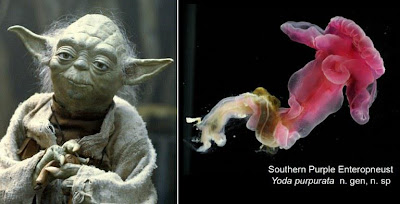 Discovered a new type of acorn worm, scientists have. Named it after Yoda, they did.

The reddish-purple worm was found about 1.5 miles (2.5 kilometers) beneath the surface of the Atlantic Ocean, and has large lips on either side of its head region that reminded researchers of the floppy-eared Stars Wars character. Its full scientific name is Yoda purpurata, or "purple Yoda."

Researchers found the worm during the ECOMAR research program, which uses a remotely operated submersible to search for new animals along the seafloor at the Mid-Atlantic Ridge between Iceland and the Azores. 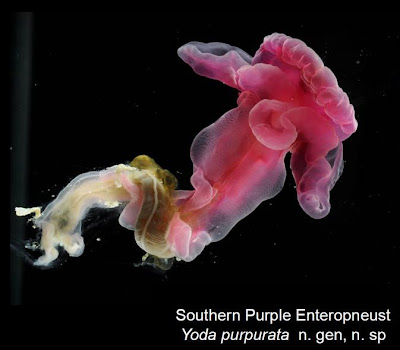 During the expedition, researchers from the University of Aberdeen in Scotland, also found two other new species of acorn worm. The animals are described in a study published in the September issue of the journal Invertebrate Biology.

Shallow water acorn worms live in burrows and are rarely seen, whereas deep sea species live on the seafloor, leaving spiral traces of poo that resemble crop circles. These traces have been seen in fossil form, but until recently, nobody knew what produced them.

Scientists are interested in these deep sea species, because they are close to the evolutionary link between vertebrates and invertebrates.

In other words, the force is strong with them.

But Yoda purpurata is hardly the only species to be named after a famous character, fictional or not. Recent examples include a horse fly named for Beyoncé, an isopod (this group includes pill bugs) near Zanzibar (an island of Tanzania in East Africa) named after Freddie Mercury ("arguably Zanzibar's most famous popular musician and singer") and slime mold beetles named after George Bush, Dick Cheney and Donald Rumsfeld. 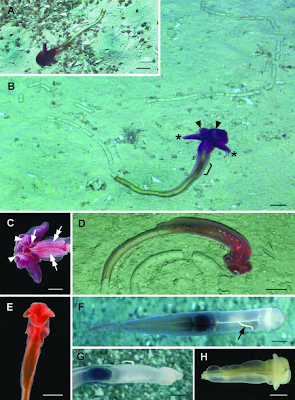