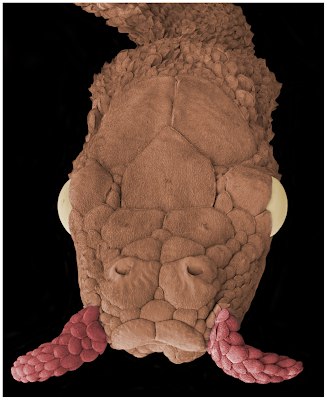 Figure 1. The unusual anatomy of the tentacled snake's head under the scanning electron microscope.
The scaled tentacles are sensitive mechanoreceptors that respond to water movements. These appendages likely aid snakes in locating fish at night, with the eyes the playing the dominant role under lighted conditions.

Abstract
Background
Aquatic tentacled snakes (Erpeton tentaculatus) can take advantage of their prey's escape response by startling fish with their body before striking. The feint usually startles fish toward the snake's approaching jaws. But when fish are oriented at a right angle to the jaws, the C-start escape response translates fish parallel to the snake's head. To exploit this latter response, snakes must predict the future location of the fish. Adult snakes can make this prediction. Is it learned, or are tentacled snakes born able to predict future fish behavior?

Methods and Findings
Laboratory-born, naïve snakes were investigated as they struck at fish. Trials were recorded at 250 or 500 frames per second. To prevent learning, snakes were placed in a water container with a clear transparency sheet or glass bottom. The chamber was placed over a channel in a separate aquarium with fish below. Thus snakes could see and strike at fish, without contact. The snake's body feint elicited C-starts in the fish below the transparency sheet, allowing strike accuracy to be quantified in relationship to the C-starts. When fish were oriented at a right angle to the jaws, naïve snakes biased their strikes to the future location of the escaping fish's head, such that the snake's jaws and the fish's translating head usually converged. Several different types of predictive strikes were observed.

Conclusions
The results show that some predators have adapted their nervous systems to directly compensate for the future behavior of prey in a sensory realm that usually requires learning. Instead of behavior selected during their lifetime, newborn tentacled snakes exhibit behavior that has been selected on a different scale—over many generations. Counter adaptations in fish are not expected, as tentacled snakes are rare predators exploiting fish responses that are usually adaptive.