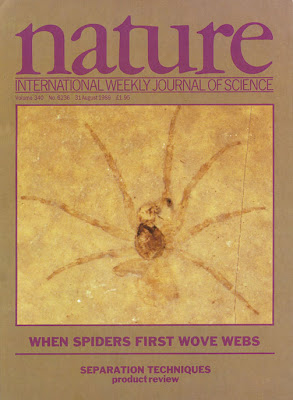 THE use of a snare woven from spun silk as a means of capturing prey is the most outstanding achievement of spiders. Fossil spider spinnerets are known from the Devonian and Carboniferous periods. Presented here, however, is evidence of the antiquity of the use of woven silk in prey capture: spider fossils showing morphological adaptations for web weaving, from the Lower Cretaceous lithographic limestone of the Sierra de Montsech, north-east Spain. Reflected light microscopy reveals details of the pattern and structure of the tarsal claws, which were adapted for the handling of silk and locomotion on a web. As only two Mesozoic spiders, Jummneus and Jurarchaea from the Jurassic of the Soviet Union, have been formally described, the four specimens reported here are an important addition to the fossil record. These belong to three new genera placed in the modern superfamilies Dinopoidea and Araneoidea. Members of both superfamilies weave orb webs or orb-web derivatives. The Montsech spiders preyed on the abundant insect life which is also preserved in the Cretaceous lithographic limestone.