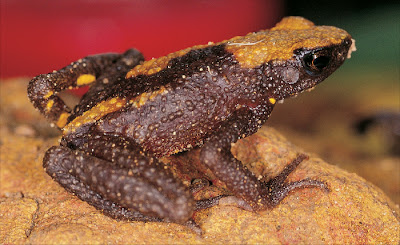 Abstract
Background: Bufonidae are a large family of toads with a subcosmopolitan distribution. Recent molecular phylogenetic analyses have revealed a radiation of toads (Adenominae) with distinct adultand larval ecomorphs on the Southern parts of the Indian subcontinent. The Indian torrential species "Ansonia" ornata has a basal position in this clade and does not group with South-East Asian Ansonia. Additionally, the nested position of "Bufo" koynayensis and an undescribed sister species,and their distinct ecologies including a non-typical egg-laying strategy within bufonids, support the recognition of a second distinct genus. In this paper we describe two new genera and one new species from the Adenominae clade.

Conclusion: The descriptions and subsequent taxonomic changes we propose result in three genera of bufonids recognised as being endemic to the Western Ghats (Ghatophryne gen. nov.,Xanthophryne gen. nov. and Pedostibes), and one to Sri Lanka (Adenomus). The spatial distribution, and arrangement of these lineages at the base of Adenominae diversification, reflectstheir Early Neogene isolation in the Western Ghats-Sri Lanka hotspot.