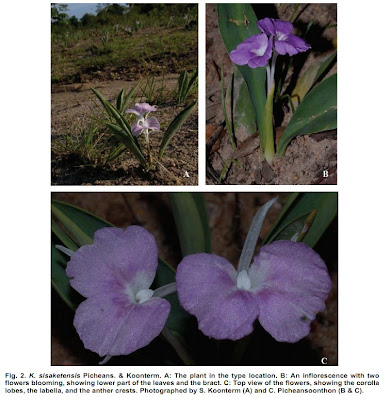 เปราะหูกระต่าย | Kaempferia sisaketensis Picheans. & Koonterm
• new Kaempferia L. from Northeastern Thailand
Abstract: Kaempferia sisaketensis (Zingiberaceae), a new species from Northeastern Thailand, is described and illustrated.This new taxon can be easily recognized by its 2-4 elliptic and glabrous leaves, pink to violet flowers with the deeplybilobed labella, and the absence of the staminodes. Relationship with its closely related taxa, K. spoliata Sirirugsa and K. chayanii Koonterm, is also discussed.
Key words: new species, Kaempferia sisaketensis, Zingiberaceae, Northeastern Thailand.
Introduction
The genus Kaempferia L. (Zingiberaceae) is one of the important medicinal plant groups in Thailand. Many taxa are known locally for their medicinal properties, K. angustifolia Rosc., K. galanga L., K. marginata Carey, K. parviflora Wall. ex Baker, K. rotunda L., to mention a few. Taxonomic studies on this plant group are essential to set up the baseline information for other related research, especially in drug development.It is a medium-sized genus with approximately 50 species, mostly distributed from India, South China, to Malesia (Mabberley, 1993). Fifteen taxa were previously accounted for Thailand (Sirirugsa, 1992). Since then, K. pulchra Ridl., was reported conspecific to K. elegan Wall. ex Baker (Searle, 1999), a new Thai record, K. candida Wall. (Jenjittikul and Larsen, 2000), was added, and a new species, K. grandifolia Saensouk & Jenjitt. (Saensouk and Jenjittikul, 2001) was recognized. More recently, taxonomic and ethnobotanical note on the genus Kaempferia L. in Thailand was discussed in details (Picheansoonthon and Koonterm, 2008). Among the sixteen taxa known for Thailand, therare and endemic K. spoliata Sirirugsa is unique, andcan be easily distinguished. It is the only species with all the key characters of the genus Kaempferia L., but the two staminodes are absent. In this paper, the second species with the same characteristic features is recognized, and the relationship between these two taxa, together with another closely related taxon, K. chayanii Koonterm, is discussed.
Distribution: This new species is so far known only from the type locality in Changwat Si Sa Ket in Northeastern Thailand.
Ecology: This new species grows on moist sandstone rocks under the shade of mixed deciduousforests, at the altitude of ca. 164 m. It is one of the dominant species of the special type of seasonal wetland vegetation called “blanket marsh vegetation” only appearing in the rainy season.
Vernacular Names: Pro Hu Kratai ( เปราะหูกระต่าย),
Rejek Muxai (ระจีกมีไซ - เขมรศรีษะเกษ).
Uses: The roots and rhizomes of this new taxonare used medicinally by local Khmer healers. The cooked young leaves are eaten with chili dipping bythe local in the villages around the type location. Note: Most of the Thai Kaempferia species are low herbs with either white or violet/purplish flowers, or the combination of both color, and the deeply divides labella. In all Thai taxa, except K. spoliata Sirirugsa, the staminodes are large andshowy. However, the staminodes are absent in thecase of K. spoliata Sirirugsa which make the species unique for the genus. Before our report of K. sisaketensis, it is the only taxa of the genus known with this character. Kaempferia spoliata Sirirugsa (Fig. 3) was described from the specimen collected from the Phanom Dongrak Range in Changwat Si Sa Ket of Thailand, closed to the Thai-Cambodian border (Sirirugsa, 1989). Kaempferia sisaketensis Picheans. & Koonterm was also discovered in the limited areas in this same mountain range. It can bereadily distinguished from K. spoliata Sirirugsa in many key characters as shown in Table 1.
The number, shape, and surface of the leaves of this new taxon are the key differences. From field observation, the color of the labella of K. spoliata Sirirugsa are always white, while those of K. sisaketensis Picheans. & Koonterm are alway spinkish to violet, generally with white patches at the bases. However, the anther crests of both species are similar and variable. From our experiences in field observation, we found out that variations in shapes and sizes of the anther crests are common in the Thai Kaempferia. And in mostcases, these characters can not be used for species differentiation. It is worth to note that K. sisaketensis starts blooming in as early as early June, the time of which K. spoliata just about to start growing from its dormancy. By the time K. spoliata flowered in asearly as end of July, all K. sisaketensis are in their fruiting or seed dispersal stages. In southern Laos, not far away from the type location of this new taxon, another species, K. chayanii Koonterm (Fig. 4), was described (Koonterm, 2008). It may probably be phylogenetically related to K. sisaketensis. Although the staminodes of K. chayanii are present, but their size is much reduced, compared with other Kaempferis species. However, all the three taxa, K. spoliata, K. sisaketensis, and K. chayanii, have the similar habit and habitat. Molecular studies on the sespecies will be performed. The result of which will be reported in the forth coming publications