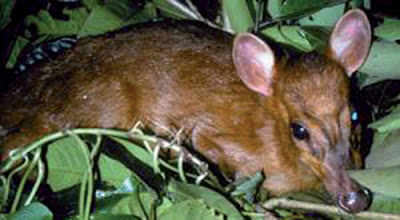 
Abstract
In May 1998, an expedition into northern Myanmar obtained detailed descriptive data on a new species of muntjac called the leaf deer, first discovered on a survey the previous year and characterized primarily by its diagnostic DNA compared to other muntjac species. Weights, measurements, and physical data were obtained from 12 freshly killed leaf deer, along with partial measurements from 90 head pieces of leaf deer found in village huts. Except for the diminutive, unbranched antlers on males, averaging 3.2 cm long, older male and female leaf deer were similar in size and appearance, with average weights of 12.1 kg and 11.8 kgfor males and females, respectively. When compared with other species, leaf deer are one of the smallest,and perhaps one of the most primitive, extant muntjacs. Two of the most distinguishing characteristics of this new species are the relatively long, equal-sized canines in both older adult males (average 2.4 cm long) and older adult females (average 2.2 cm long), and the lack of spotting on the coats of a newborn and two juveniles estimated to be < 2 months old. All older males (n = 3) and 40% of older females (n = 5) had healed wounds on one or both ears. These wounds, in addition to the large canines in both sexes, may indicate that females as well as males compete actively for resources. Although still relatively abundant throughout mid-elevation dense evergreen forests, between the northern extremities of the Mai Kha and Mali Kha Rivers in north Myanmar, the currently known distribution of the leaf deer is outside any protected areas. Persistent hunting by local people with snares, dogs, and crossbows for a thriving market trade in deer leather, have caused noticeable decreases in numbers of leaf deer captured over recent yearsand could threaten the future survival of this new species.
Key words: muntjac, leaf deer, Muntiacus putaoensis, Myanmar