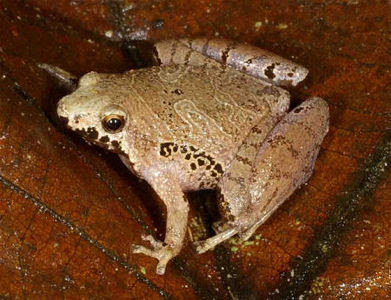 New species of miniature frog discovered in Malaysia: Photo taken in August 2008 shows a new species of miniature narrow-mouthed frog, named Microhyla malang, discovered at Kubah National Park in Sarawak state on the island of Borneo in Malaysia.
(Photo courtesy of Kyoto University professor Masafumi Matsui) (Kyodo)
Abstract
An examination of the holotype of Microhyla borneensis Parker 1928 revealed that this nomen applies to a miniaturized narrow-mouthed frog from Borneo that recently was described as Microhyla nepenthicola Das & Haas 2010. This is confirmed concordantly by body size of the female holotype of M. borneensis, and by its reduced extent of toe webbing and rather rounded, short snout profile. Consequently, the name M. nepenthicola is to be considered as a junior synonym of M. borneensis, and an old report of nepenthiphilous breeding habits of M. borneensis is therefore justified. A sympatric larger species usually treated as M. borneensis has no scientific name and is described here as M. malang sp. nov. The new species and M. borneensis are sister to each other, and together are closely related to M. mantheyi from Peninsular Malaysia. These three species are morphologically very similar, but can be distinguished by body size, color pattern, and extent of toe webbing. Phylogenetic relationships, miniaturization, and larval oral morphology in the genus Microhyla are discussed.
Key words: Microhyla, new species, synonymy, mitochondrial DNA, phylogeny, body size, Borneo, miniaturization 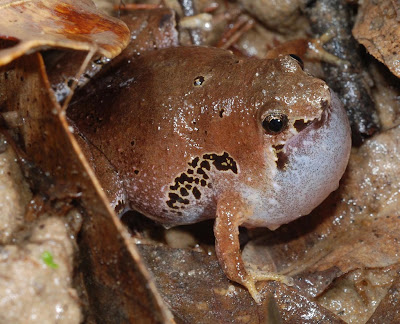 Etymology. The specific epithet malang is a Malay word denoting unlucky, alluding to the long history of taxonomic confusion in which it was called under the name of its sister species M. borneensis. It is also an allusion of Matang, the type locality of the species in western Sarawak. 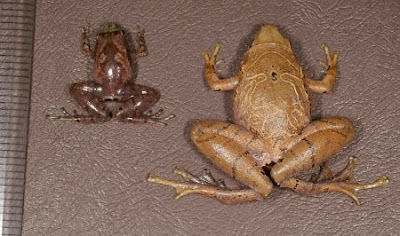