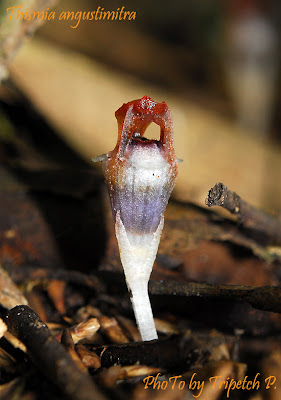 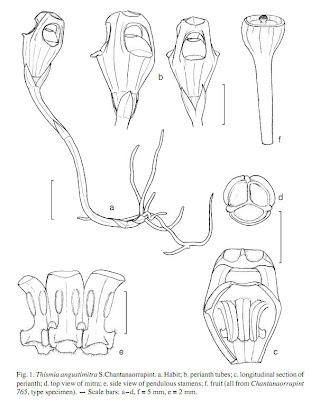 Distribution — Known only from the type locality in Phu Wau Wildlife Sanctuary,Nong Khai Province, Thailand.
Ecology & Phenology — Thismia angustimitra was collected on sandy soil coveredby leaf litters at the edge of a mountain in bamboo forest. Elevation 200 m. Flowering and fruiting in the rainy season.
Etymology — The speciﬁc name refers to the narrow mitre.
Notes — Thismia angustimitra is closely related to T. mirabilis, a species described from Khao Yai National Park and Ko Chang Island, Thailand, which also has three fovea at the top of the mitre, and has vermiform roots. However, T. angustimitra has a much narrower mitre with curved annulus, whilst T. mirabilis has a broad mitre anderect annulus. Within the treatment of Jonker (1938), T. mirabilis and T. angustimitra appeared to resemble the species in sect. Sarcosiphon, especially T. crocea (Becc.) J.J.Sm.T. clandestina (Blume) Miq . and T. episcopalism (Becc.) J.J.Sm., as they have in common reduced outer perianth lobes and their inner ones are connate to an erect mitre with three holes. However, the former differ from the latter in having vermiform roots, as the species in sect. Sarcosiphon have a coralloid root system.
Concerning the distribution range, as Nong Khai Province has a common border with Laos PDR, it is expected that the new species might occur in Laos PDR as well 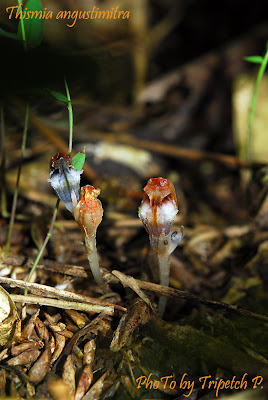 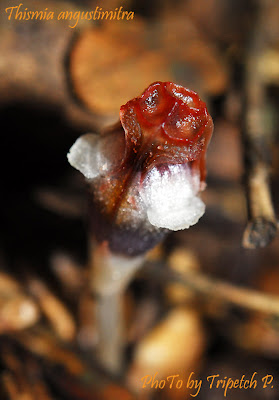