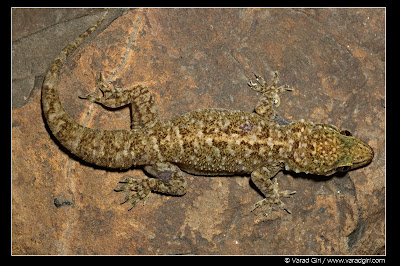 Abstract: A new species of Hemidactylus gecko (Squamata: Gekkonidae) is described from Girnar in the Junagadh district of Gujarat, India. This medium-sized, chiefly rupicolous gecko may be distinguished from its south Asian congeners by having 12–16 rows of irregularly arranged, flattened to weakly conical dorsal tubercles, 7–9 subdigital lamellae on digit I of the pes and 10–11 on digit IV, and 12–14 femoral pores on each thigh separated by a median diastema. This is the second Hemidactylus currently regarded as endemic to Gujarat and the 10th member of the genus recorded for the state.