Ongoing fieldwork and molecular research continues to reveal that the monsoonal tropics of northern Australia contain more vertebrate species than currently recognised. Here we focus on two morphologically distinctive, yet unrecognised forms in the genus Gehyra from the southern Kimberley region and surrounding deserts. We base our descriptions on a combination of unpublished genetic data and a morphological examination of voucher specimens. We recognise and redescribe G. kimberleyi, a species with a broad distribution extending over most of the south-west Kimberley, across the Great Sandy Desert and into the far northern Pilbara. This species has been previously assigned to G. pilbara owing to its frequent occurrence on termite mounds and short snout, but can be distinguished from G. pilbara and other regionally sympatric Gehyra by its moderate body size, moderate number of pre-cloacal pores in males (12–17) and aspects of dorsal colouration. We also describe Gehyra girloorloo sp. nov., a small rock-dwelling species with a short snout, low number of pre-cloacal pores in males (8–11) and pinkish-grey dorsal colouration with alternating series of indistinct pale spots and irregular transversely-aligned dark blotches. The new species appears to be restricted to a relatively small region of exposed limestone karst in the south-west Kimberley and is entirely circumscribed by morphologically similar congeners. 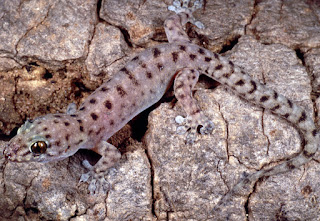