[Herpetology • 2016] Frogs at the Summits: Phylogeny of the Andean Frogs of the Genus Telmatobius (Anura, Telmatobiidae) based on Phenotypic Characters 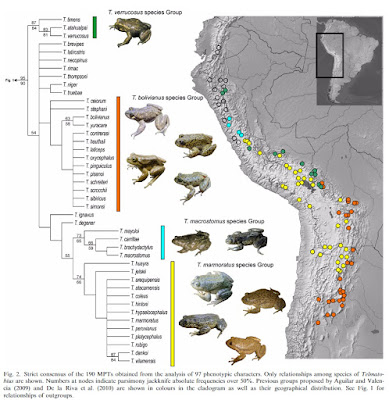 Abstract
A phylogenetic hypothesis for the frogs of the genus Telmatobius that includes a comprehensive sample of the morphological and geographical variation is lacking. Obtaining such a hypothesis constitutes the main focus of this contribution. A phylogenetic matrix was generated based on 97 phenotypic characters and 56 terminals. A parsimony analysis of this matrix was performed with TNT. Telmatobius is found to be monophyletic and well supported by 11 synapomorphies. Although the consensus tree shows several polytomies, four main groups have been recovered. The well-supported T. verrucosus Group includes forest and sub-paramo species from Bolivia and Peru, and is the sister group of the remaining species. The T. bolivianus Group includes forest and inter-Andean valley species from Argentina and Bolivia but it is poorly supported. Two supported high-altitude groups have been recovered, the T. macrostomus Group from the Central Andes of Peru, and the T. marmoratus Group from the Altiplano- Puna Plateau of Argentina, Bolivia, Peru and Chile and its adjacent Pacific and Northern slopes. The synapomorphies proposed for Telmatobius are discussed as well as the evolution of some of these synapomorphies and other characters within the genus.

Telmatobius is a monophyletic genus that has evolved in relation to water ecosystems of the Andes and its precursor mountain ranges. The species groups recovered in the present phylogenetic hypothesis are congruent with previous hypotheses (Aguilar and Valencia, 2009; De la Riva et al., 2010). The taxonomic distribution of some osteological characters shows that the states resembling an immature morphological configuration are more common among species of the T. marmoratus and T. macrostomus Groups. This suggests that heterochronies in osteological development could explain part of the interspecific variation in the morphology of the skeleton. The species belonging to those two groups live at higher altitudes and are in general more aquatic than there maining species living at lower altitudes. Further-more, the occurrence of morphological characters associated with inertial suction feeding in the species of the T. marmoratus Group suggests that suction would have evolved in this highland aquatic group. It is noteworthy that this mode of underwater prey capture has no precedents in Neobatrachia, the group containing 96% of frogs and toads. The present analysis is the most comprehensive phylogenetic analysis of Telmatobius to date and a total evidence analysis is the immediate next step

Sebastián Barrionuevo. 2016. Frogs at the Summits: Phylogeny of the Andean Frogs of the Genus Telmatobius (Anura, Telmatobiidae) based on Phenotypic Characters.  Cladistics.  DOI:  10.1111/cla.12158
ResearchGate.net/publication/301297997_Frogs_at_the_summits_phylogeny_of_the_Andean_frogs_of_the_genus_Telmatobius_Anura_Telmatobiidae_based_on_phenotypic_characters