Abstract
New World monkeys (platyrrhines) are a diverse part of modern tropical ecosystems in North and South America, yet their early evolutionary history in the tropics is largely unknown. Molecular divergence estimates suggest that primates arrived in tropical Central America, the southern-most extent of the North American landmass, with several dispersals from South America starting with the emergence of the Isthmus of Panama 3-4 million years ago (Ma). The complete absence of primate fossils from Central America has, however, limited our understanding of their history in the New World. Here we present the first description of a fossil monkey recovered from the North American landmass, the oldest known crown platyrrhine, from a precisely dated 20.9-Ma layer in the Las Cascadas Formation in the Panama Canal Basin, Panama. This discovery suggests that family-level diversification of extant New World monkeys occurred in the tropics, with new divergence estimates for Cebidae between 22 and 25 Ma, and provides the oldest fossil evidence for mammalian interchange between South and North America. The timing is consistent with recent tectonic reconstructions of a relatively narrow Central American Seaway in the early Miocene epoch, coincident with over-water dispersals inferred for many other groups of animals and plants. Discovery of an early Miocene primate in Panama provides evidence for a circum-Caribbean tropical distribution of New World monkeys by this time, with ocean barriers not wholly restricting their northward movements, requiring a complex set of ecological factors to explain their absence in well-sampled similarly aged localities at higher latitudes of North America. 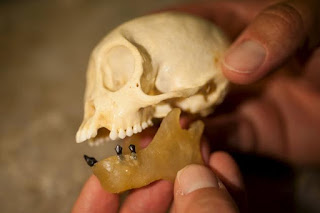 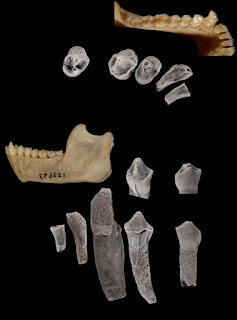 Seven tiny teeth tell the story of an ancient monkey that made a 100-mile ocean crossing between North and South America into modern-day Panama – the first fossil evidence for the existence of monkeys in North America. http://news.ufl.edu/articles/2016/04/paleontologists-find-first-fossil-monkey-in-north-america--but-how-did-it-get-here.php