The giant flightless bird Sylviornis neocaledoniae (Aves: Sylviornithidae) existed on La Grande Terre and Ile des Pins, New Caledonia, until the late Holocene when it went extinct shortly after human arrival on these islands. The species was generally considered to be a megapode (Megapodiidae) until the family Sylviornithidae was erected for it in 2005 to reflect multiple cranial autapomorphies. However, despite thousands of bones having been reported for this unique and enigmatic taxon, the postcranial anatomy has remained largely unknown. We rectify this deficiency and describe the postcranial skeleton of S. neocaledoniae based on ~600 fossils and use data from this and its cranial anatomy to make a comprehensive assessment of its phylogenetic affinities. Sylviornis neocaledoniae is found to be a stem galliform, distant from megapodiids, and the sister taxon to the extinct flightless Megavitiornis altirostris from Fiji, which we transfer to the family Sylviornithidae. These two species form the sister group to extant crown-group galliforms. Several other fossil galloanseres also included in the phylogenetic analysis reveal novel hypotheses of their relationships as follows: Dromornis planei (Dromornithidae) is recovered as a stem galliform rather than a stem anseriform; Presbyornis pervetus (Presbyornithidae) is the sister group to Anseranatidae, not to Anatidae; Vegavis iaai is a crown anseriform but remains unresolved relative to Presbyornis pervetus, Anseranatidae and Anatidae. Sylviornis neocaledoniae was reconstructed herein to be 0.8 m tall in a resting stance and weigh 27–34 kg. The postcranial anatomy of S. neocaledoniae shows no indication of the specialised adaptation to digging seen in megapodiids, with for example, its ungual morphology differing little from that of chicken Gallus gallus. These observations and its phylogenetic placement as stem galliforms makes it improbable that this species employed ectothermic incubation or was a mound-builder. Sylviornis neocaledoniae can therefore be excluded as the constructor of tumuli in New Caledonia. 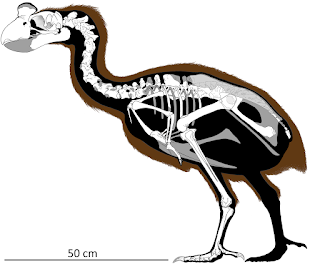 Our new anatomical information and phylogenetic analysis finds that the large flightless bird Sylviornis neocaledoniae, originally described as a ratite, but then long regarded as a megapode, to be a stem galliform that forms a clade with Megavitiornis altirostris, forming Sylviornithidae. Neither species are megapodes, but the former perception that they were has led to the suggestion that S. neocaledoniae constructed the large mounds or tumuli in New Caledonia. Ectothermic incubation uniquely characterises Megapodiidae[21], with all included taxa depositing their eggs either in mounds, where heat from composting vegetation warms the eggs, or in holes dug in thermally heated soil or sand where sun can heat it such as in beach dunes. Our finding that it is a stem galliform (and thus not a megapode) makes it most unlikely to have been a mound-builder, as this scenario would require both mound-building and ectothermic incubation to have evolved twice. Furthermore, Sylviornis neocaledoniae shows no specific adaptation for digging to facilitate mound-building, unlike all extant megapodiids, making it even more unlikely that it exhibited ectothermic incubation.