Abstract
More than 80 incidences of fish predation by semi-aquatic spiders – observed at the fringes of shallow freshwater streams, rivers, lakes, ponds, swamps, and fens – are reviewed. We provide evidence that fish predation by semi-aquatic spiders is geographically widespread, occurring on all continents except Antarctica. Fish predation by spiders appears to be more common in warmer areas between 40° S and 40° N. The fish captured by spiders, usually ranging from 2–6 cm in length, are among the most common fish taxa occurring in their respective geographic area (e.g., mosquitofish [Gambusia spp.] in the southeastern USA, fish of the order Characiformes in the Neotropics, killifish [Aphyosemion spp.] in Central and West Africa, as well as Australian native fish of the genera Galaxias, Melanotaenia, and Pseudomugil). Naturally occurring fish predation has been witnessed in more than a dozen spider species from the superfamily Lycosoidea (families Pisauridae, Trechaleidae, and Lycosidae), in two species of the superfamily Ctenoidea (family Ctenidae), and in one species of the superfamily Corinnoidea (family Liocranidae). The majority of reports on fish predation by spiders referred to pisaurid spiders of the genera Dolomedes and Nilus (>75% of observed incidences). There is laboratory evidence that spiders from several more families (e.g., the water spider Argyroneta aquatica [Cybaeidae], the intertidal spider Desis marina [Desidae], and the ‘swimming’ huntsman spider Heteropoda natans [Sparassidae]) predate fish as well. Our finding of such a large diversity of spider families being engaged in fish predation is novel. Semi-aquatic spiders captured fish whose body length exceeded the spiders’ body length (the captured fish being, on average, 2.2 times as long as the spiders). Evidence suggests that fish prey might be an occasional prey item of substantial nutritional importance. 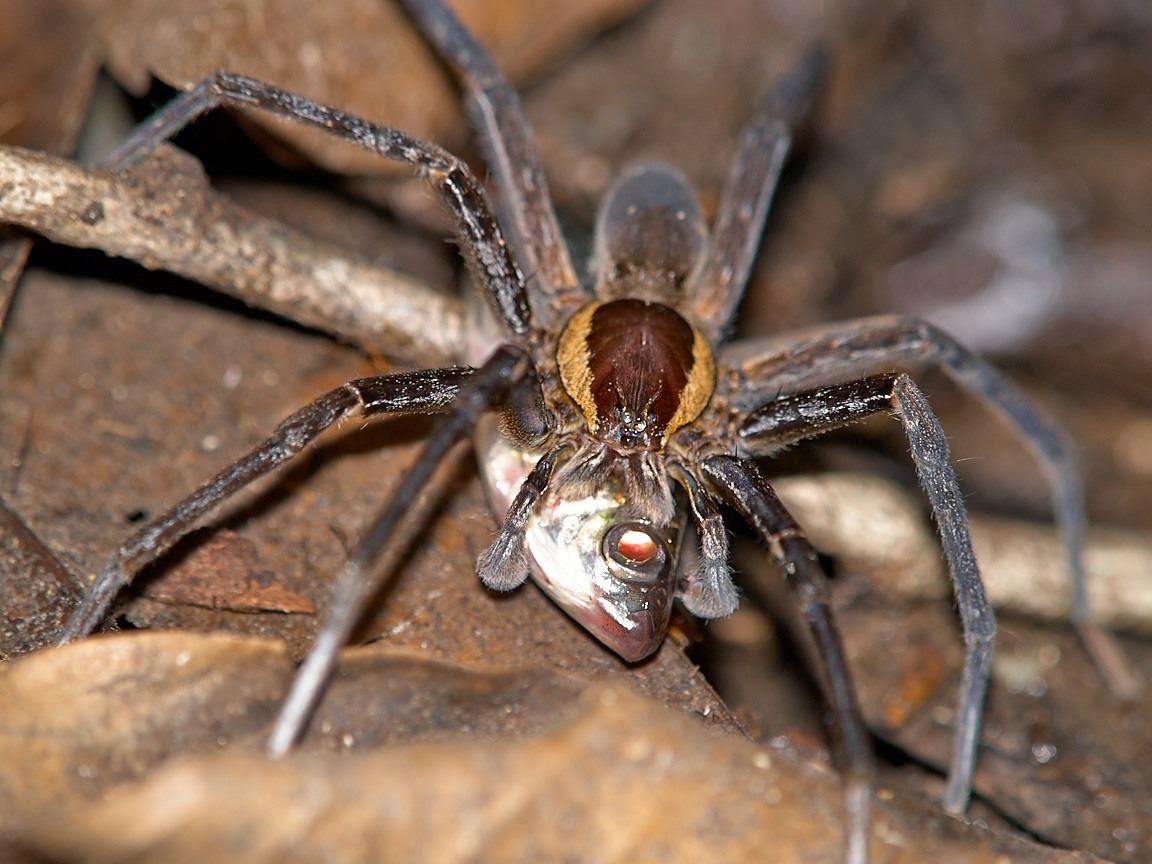 Spiders found on almost every continent in the world feast on fish by hunting them then dragging them to dry land, where they devour the creature over several hours, scientists have discovered.
Zoologists from Australia and Switzerland found that spiders from at least five different families eat fish far bigger than themselves.
While traditionally viewed as insectivorous – or a predator of insects – experts are becoming increasingly aware that spiders will eat other forms of meat to survive.
Published in PLOS ONE, the study showed spiders both in the wild and laboratory conditions hunting, killing and eating fish.
Spiders Eat Fish: https://uk.news.yahoo.com/spiders-eat-fish-210000230.html