A new species of limestone cave-adapted gecko of the Cyrtodactylus pulchellus complex, Cyrtodactylus hidupselamanya sp. nov., is described from an isolated karst formation at Felda Chiku 7, Kelantan, Peninsular Malaysia. This formation is scheduled to be completely quarried for its mineral content. From what we know about the life history of C. hidupselamanya sp. nov., this will result in its extinction. A new limestone forest-adapted species, Cyrtodactylus lenggongensis sp. nov., from the Lenggong Valley, Perak was previously considered to be conspecific with C. bintangrendah but a re-evaluation of morphological, color pattern, molecular, and habitat preference indicates that it too is a unique lineage worthy of specific recognition. Fortunately C. lenggongensis sp. nov. is not facing extinction because its habitat is protected by the UNESCO Archaeological Heritage of the Lenggong Valley due to the archaeological significance of that region. Both new species can be distinguished from all other species of Cyrtodactylus based on molecular evidence from the mitochondrial gene ND2 and its flanking tRNAs as well as having unique combinations of morphological and color pattern characteristics. Using a time-calibrated BEAST analysis we inferred that the evolution of a limestone habitat preference and its apparently attendant morphological and color pattern adaptations evolved independently at least four times in the C. pulchellus complex between 26.1 and 0.78 mya. 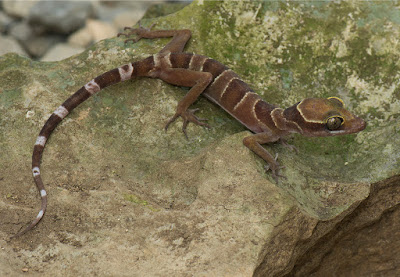 Distribution. Cyrtodactylus hidupselamanya sp. nov is known only from the type locality at Felda Chiku 7, Kelantan,  Peninsular  Malaysia  (Fig.  1).  Another  karst  formation  approximately  1  km  to  the  south  was  not  surveyed. There are other isolated karst formations 5–10 km away that were also not surveyed.
Etymology. The specific epithet hidupselamanya is a modification of the Malay words “hidup selamanya” which, loosely translated means “live forever” and is in reference this species precarious future being that its limestone habitat is targeted to be completely quarried.

Remarks. The karst formation in which Cyrtodactylus hidupselamanya sp. nov. occurs is scheduled to be completely quarried for its limestone and other raw materials by ASN Cement Sdn Bhd. From what we currently know about this species, this will result in its extinction.

Etymology. The specific epithet lenggongensis refers to the Lenggong Valley, Perak where this species is endemic.

Natural History. Cyrtodactylus lenggongensis sp. nov. is saxicolous and found on limestone karst outcrops and in the vicinity of the mouths of limestone caves (Fig. 7). During the day, geckos are occasionally observed hiding in cracks and crevices of the outcrops. At night, lizards emerge and can be found perching or crawling over  the  walls  of  the  karst  formation  1–3  m  above  the  ground. No  lizards  were  found  on  the  surrounding  vegetation.

Remarks. Unlike Cyrtodactylus  hidupselamanya  sp.  nov., C.  lenggongensis  sp.  nov.  is  not  destined  to  become extinct by the quarrying interests of foreign industrial companies but rather it is protected through the UNESCO Archaeological Heritage of the Lenggong Valley due to the area’s archaeological significance. It is sad that ancient living relicts of the past (i.e. species) that did not happen to go extinct do not garner as much importance or appreciation as archeological relicts that did.