[Paleontology • 2016] Apatoraptor pennatus • A New Caenagnathid (Dinosauria: Oviraptorosauria) from the Horseshoe Canyon Formation of Alberta, Canada, and A Reevaluation of The Relationships of Caenagnathidae

Our understanding of caenagnathids has benefited from recent discoveries, including nearly complete skeletons from the Hell Creek Formation of Montana. However, their phylogenetic relationships remain unclear. A new specimen from the Horseshoe Canyon Formation of Alberta has implications for the phylogeny and paleobiology of these creatures. The partial skeleton is articulated and includes a mandible, a full cervical and dorsal series of vertebrae, a right pectoral girdle and arm, a sternum, gastralia, a partial ilium, and a partial hind limb. The mandible is edentulous and the articular ridge is intermediate in form between Caenagnathus collinsi and Chirostenotes pergracilis. The neck is long and composed of at least 11 well-pneumatized cervical vertebrae with fused cervical ribs. The dorsal ribs have finger-like uncinate processes dissimilar in shape to those of other oviraptorosaurs. The pectoral girdle is large and typically maniraptoran, except that the glenoid of the scapulocoracoid faces laterally instead of posteroventrally. The arm is well muscled and can be interpreted to have been a pennibrachium, as indicated by ulnar papillae on the ulna. The manus is characterized by a short first metacarpal but an elongate phalanx I-1 and oviraptorid-like phalangeal proportions in the second digit. These and other features indicate that the specimen represents a new taxon, Apatoraptor pennatus, gen. et sp. nov. Phylogenetic analysis resolves the complicated relationships of Caenagnathidae and allows the evolution of display features to be traced throughout Oviraptorosauria. 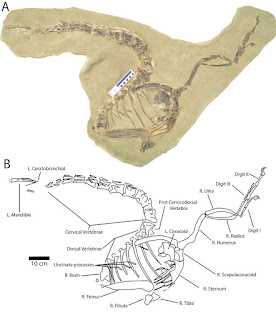 Gregory F. Funston and Philip J. Currie. 2016. A New Caenagnathid (Dinosauria: Oviraptorosauria) from the Horseshoe Canyon Formation of Alberta, Canada, and A Reevaluation of The Relationships of Caenagnathidae. Journal of Vertebrate Paleontology. DOI: 10.1080/02724634.2016.1160910 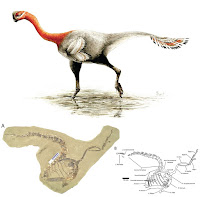