Sea lions, otters, humpback whales and harbor seals are familiar sights to most native Californians today, but the waters off this coastline once harbored a much stranger fauna: giant bony-toothed birds, sharks the size of whales, flightless penguin-like auks, sea cows and giant predatory sperm whales.

Several species of walruses also lived among these animals, but only one survived to the present-day. Robert Boessenecker, author of a paper published in PLOS ONE today, explains what one rare fossil of an extinct walrus reveals about life on Sharkstooth Hill about 15 million years ago 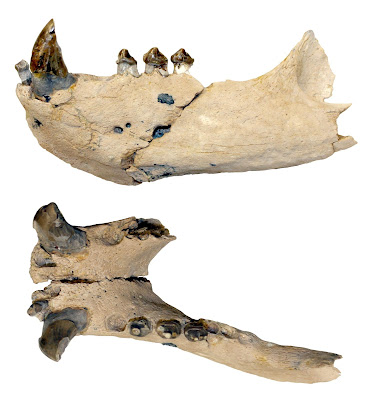 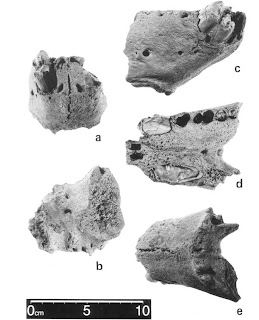 Abstract
Background:
A number of aberrant walruses (Odobenidae) have been described from the Neogene of the North Pacific, including specialized suction-feeding and generalist fish-eating taxa. At least one of these fossil walruses has been hypothesized to have been a specialized predator of other marine mammals, the middle Miocene walrus Pelagiarctos thomasi from the Sharktooth Hill Bonebed of California (16.1–14.5 Ma).

Methodology/Principal Findings:
A new specimen of Pelagiarctos from the middle Miocene “Topanga” Formation of southern California (17.5–15 Ma) allows a reassessment of the morphology and feeding ecology of this extinct walrus. The mandibles of this new specimen are robust with large canines, bulbous premolars with prominent paraconid, metaconid, hypoconid cusps, crenulated lingual cingula with small talonid basins, M2 present, double-rooted P3–M1, single-rooted P1 and M2, and a P2 with a bilobate root. Because this specimen lacks a fused mandibular symphysis like Pelagiarctos thomasi, it is instead referred to Pelagiarctos sp. This specimen is more informative than the fragmentary holotype of Pelagiarctos thomasi, permitting Pelagiarctos to be included within a phylogenetic analysis for the first time. Analysis of a matrix composed of 90 cranial, dental, mandibular and postcranial characters indicates that Pelagiarctos is an early diverging walrus and sister to the late Miocene walrus Imagotaria downsi. We reevaluate the evidence for a macropredatory lifestyle for Pelagiarctos, and we find no evidence of specialization towards a macrophagous diet, suggesting that Pelagiarctos was a generalist feeder with the ability to feed on large prey.

Conclusions/Significance:
This new specimen of Pelagiarctos adds to the knowledge of this problematic taxon. The phylogenetic analysis conclusively demonstrates that Pelagiarctos is an early diverging walrus. Pelagiarctos does not show morphological specializations associated with macrophagy, and was likely a generalist predator, feeding on fish, invertebrates, and the occasional warm-blooded prey item.