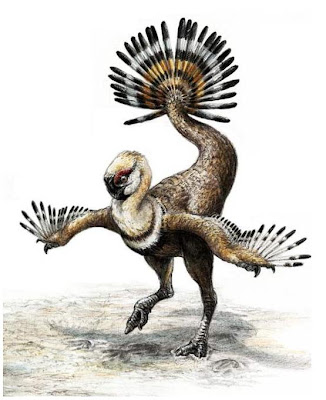 Oviraptorosaur caudal osteology is unique among theropods and is characterized by posteriorly persistent and exceptionally wide transverse processes, anteroposteriorly short centra, and a high degree of flexibility across the pre-pygostyle vertebral series. Three-dimensional digital muscle reconstructions reveal that, while oviraptorosaur tails were reduced in length relative to the tails of other theropods, they were muscularly robust. Despite overall caudal length reduction, the relative size of the M. caudofemoralis in most oviraptorosaurs was comparable with those of other non-avian theropods. The discovery of a second Nomingia specimen with a pygostyle confirms that the fused terminal vertebrae of the type specimen were not an abnormality. New evidence shows that pygostyles were also present in the oviraptorosaurs Citipati and Conchoraptor. Based on the observed osteological morphology and inferred muscle morphology, along with the recognition that many members of the group probably sported broad tail-feather fans, it is postulated that oviraptorosaur tails were uniquely adapted to serve as dynamic intraspecific display structures. Similarities, including a reduced vertebral series and a terminal pygostyle, between the tails of oviraptorosaurs and the tails of theropods widely accepted as basal members of the Avialae, appear to be convergences.

A group of dinosaurs that roamed Alberta 75 million years ago showed their swagger with a fan of feathers in much the same way a modern-day peacock flashes its colourful tail, new research from an Edmonton-based paleontologist suggests.

“A lot of the most flamboyant characteristics of animals tend to be associated with display and dinosaurs are no exception,” said Scott Persons, a University of Alberta PhD candidate who led the research published Friday in the journal Acta Palaeontologica Polonica.

Persons studied the tails of oviraptors, a group of dinosaurs that had beaks and feathers. Previous research has shown some feathered dinosaurs used their plumage for insulation and flight. Oviraptors could not fly but Persons said their tail feathers were used in much the same way as a peacock.

“I like to imagine an oviraptor strutting its stuff and showing off its tail like a peacock or modern-day turkey. You can think of it like a dinosaurian Vegas showgirl with feathers,” Persons said Thursday.

Oviraptors roamed parts of China, Mongolia and Alberta. Some of these dinosaurs were smaller than a turkey, while others were more than five metres in length. Their fans of feathers also varied in size.

While the tail plumage may have attracted mates, it also may have endangered oviraptors by slowing them down and making it easier for predators to catch them.

“But that’s kind of how sex selection works,” Persons said. “Sometimes, if you want to strut your stuff to let the female know you’ve got good genes, you need to show her you’re a risk taker and you’re able to support such a flamboyant fan of feathers.”

Previous research has shown other dinosaurs also possessed display structures, such as the small crests over the eyes of Tyrannosaurus rex, showing the animal had “sex on the brain,” Persons said. In a study published last year, a University of Calgary paleontologist found another group of dinosaurs also may have sprouted feathers as a secondary sexual characteristic.

Persons’ research focused on the tails of oviraptors. He found the vertebrae in the tails were tightly pressed together while the joints between the vertebrae were flexible. The vertebrae also had wide attachment sites for muscles that would allow the dinosaurs to raiseand twist their tails. At the end of the tail was a fusion of vertebrae that formed a ridged, blade-like structure called a pygostyle, which acts as the anchor for a fan of feathers in modern-day birds.

Added to that was the previous finding that oviraptors could not fly.

“What you’re left with is the possibility that these big feather fans were an adaptation for display. We now have evidence of dinosaurs doing pretty much everything with their feathers that modern-day birds do. They can use them for insulation, to hold in body heat, we’ve got dinosaurs with wings made of feathers that allowed them to fly, and now we know they’re also used for display. So that sort of rounds out our view of dinosaur feathers.”

Persons’ research was partly based on his study of fossils found in Mongolia, however there is also evidence oviraptors lived in Alberta. 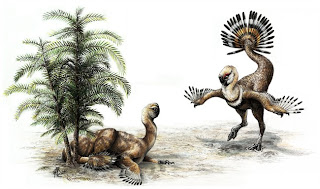 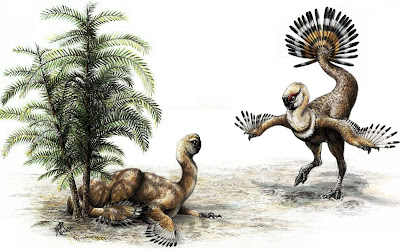 Some Alberta dinosaurs as flamboyant as Vegas showgirls http://www.edmontonjournal.com/technology/Some+Alberta+dinosaurs+flamboyant+Vegas+showgirls/7773401/story.html via @edmontonjournal

Best evidence yet that dinosaurs used feathers for courtship http://phys.org/news/2013-01-evidence-dinosaurs-feathers-courtship.html via @physorg_com 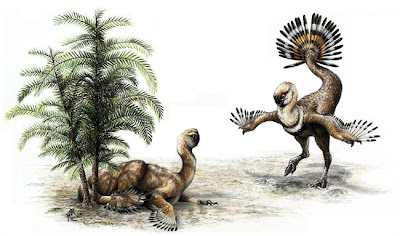 Best evidence yet that dinosaurs used feathers for courtship
http://phys.org/news/2013-01-evidence-dinosaurs-feathers-courtship.html via @physorg_com

Paleontology researcher Scott Persons followed a chain of fossil evidence that started with a peculiar fusing together of vertebrae at the tip of the tail of four different species of dinosaurs, some separated in time and evolution by 45 million years.

Persons says the final vertebrae in the tails of a group of dinosaurs called oviraptors were fused together forming a ridged, blade-like structure. "The structure is called a pygostyle" says Persons. "Among modern animals only birds have them."

Researchers say fossils of Similicaudipteryx, an early oviraptor, reveals feathers radiating from the fused bones at the tail tip. Similicaudipteryx was not known to be a flying dinosaur and Persons contends its tail feathers evolved as a means of waving its feathered tail fans.

No direct fossil evidence of feathers has been found with the fossils of the oviraptors that followed Similicaudipteryx, but Persons says there is still strong evidence they had a feathered tail.

Persons says the hypothesis of oviraptor tail waving is supported by both the bone and muscle structure of the tail.

Individual vertebrae at the base of an oviraptor's tail were short and numerous, indicating great flexibility. Based on dissections of modern reptile and bird tails, Persons reconstruction of the dinosaur's tail muscles revealed oviraptors had what it took to really shake their tail feathers.

Large muscles extended far down the tail and had a sufficient number of broad connection points to the vertebrae to propel oviraptor's tail feathers vigorously from side to side and up and down.

Oviraptors were two-legged dinosaurs that had already gone through major diversifications from the iconic, meat eating dinosaur family. Oviraptors were plant eaters that roamed parts of China, Mongolia, and Alberta during the Cretaceous period, the final age of the dinosaur.

"By this time a variety of dinosaurs used feathers for flight and insulation from the cold, "said Persons. "This shows that by the Late Cretaceous dinosaurs were doing everything with feathers that modern birds do now," said Persons.

In addition to feathered-tail waving, oviraptors also had prominent bone crests on their head, which Persons says the dinosaur also may have used in mating displays.

"Between the crested head and feathered-tail shaking, oviraptors had a propensity for visual exhibitionism," said Persons.