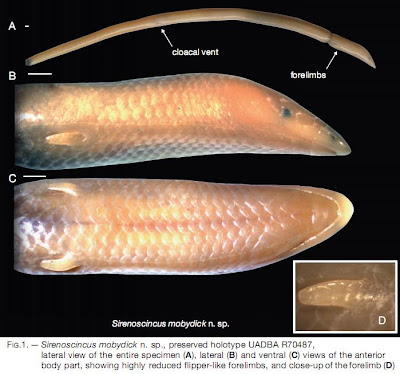 The “forelimbs only” bauplan, characterised by the combined presence of well-developed fingered forelimbs and the complete absence of hindlimbs, is rare among terrestrial tetrapods. It is restricted to three lineages of squamates with elongated worm-like bodies, the amphisbaenian genus Bipes Lacépède, 1788 and the scincid genera Sirenoscincus Sakata & Hikida, 2003 and Jarujinia Chan-ard, Makchai & Cota, 2011.

In the present study, we describe a new species of Sirenoscincus from Marosely, Port Bergé region, northwest Madagascar, which presents a remarkable variation of this bauplan. The forelimbs of S. mobydick n. sp. differ from S. yamagishii Sakata & Hikida, 2003 – the only other known species in the genus – by the complete absence of any fingers or claws, therefore superficially resembling flippers, a combination of characters unique among terrestrial tetrapods.

Sirenoscincus mobydick n. sp. is also differentiated from S. yamagishii by several apomorphic cephalic scalation characters, such as: 1) the absence of the frontonasal, likely fused with the frontal (versus presence of both scales); 2) the absence of the preocular, likely fused with the loreal (versus presence of both scales); and 3) the absence of the postsubocular, likely fused with the pretemporal (versus presence of both scales). Additionally, we provide detailed data on the appendicular skeleton of this new species of “mermaid skink” based on X-ray computed tomography that reveal several significant regressions of skeletal elements: 1) autopodial bones highly reduced in size and number; 2) highly reduced pelvic girdle and complete absence of hindlimbs, with the notable exception of two faintly distinguishable bony corpuscles probably representing rudiments of ancestral hindlimb bones; and 3) regressed sclerotic ring with five ossicles only, therefore representing the lowest value ever observed among lizards. Our study highlights the importance of the rare “forelimbs only bauplan” for investigating macroevolutionary questions dealing with complete limb loss in vertebrates, a convergent phenomenon that has repeatedly occurred 16 to 20 times within Scincidae Gray, 1825.

Etymology: The specific epithet refers to Moby Dick, the famous albino sperm whale imagined by Herman Melville (1851), with whom the new species shares several uncommon characteristics, such as the lack of hindlimbs, the presence of flipper-like forelimbs, highly reduced eyes, and the complete absence of pigmentation. The name is an invariable noun in apposition.