[Invasive Alien • 2013] Outdoor Cats : Single Greatest Source of Human-Caused Mortality for Birds and Mammals | The Impact of free-ranging Domestic Cats on Wildlife of the United States

Anthropogenic threats, such as collisions with man-made structures, vehicles, poisoning and predation by domestic pets, combine to kill billions of wildlife annually. Free-ranging domestic cats have been introduced globally and have contributed to multiple wildlife extinctions on islands. The magnitude of mortality they cause in mainland areas remains speculative, with large-scale estimates based on non-systematic analyses and little consideration of scientiﬁc data. Here we conduct a systematic review and quantitatively estimate mortality caused by cats in the United States. We estimate that free-ranging domestic cats kill 1.4–3.7 billion birds and 6.9–20.7 billion mammals annually. Un-owned cats, as opposed to owned pets, cause the majority of this mortality. Our ﬁndings suggest that free-ranging cats cause substantially greater wildlife mortality than previously thought and are likely the single greatest source of anthropogenic mortality for US birds and mammals. Scientiﬁcally sound conservation and policy intervention is needed to reduce this impact. 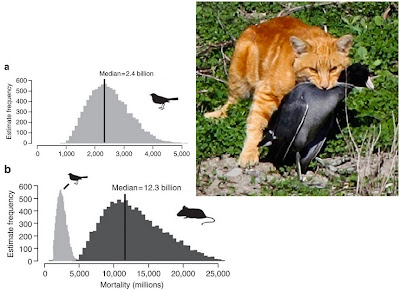 A new peer-reviewed study published today and authored by scientists from two of the world’s leading science and wildlife organizations – the Smithsonian Conservation Biology Institute and the U.S. Fish and Wildlife Service (FWS) – has found that bird and mammal mortality caused by outdoor cats is much higher than has been widely reported, with annual bird mortality now estimated to be 1.4 to 3.7 billion and mammal mortality likely 6.9 – 20.7 billion individuals.

The study, which offers the most comprehensive analysis of information on the issue of outdoor cat predation, was published in the online research journal Nature Communications and is based on a review of 90 previous studies. The study was authored by Dr. Peter Marra and Scott Loss, research scientists at the Smithsonian Conservation Biology Institute and by Tom Will from the U.S. Fish and Wildlife Service’s Division of Migratory Birds.

According to Dr. George Fenwick, President of American Bird Conservancy, one of the leading bird conservation organizations in the U.S. and a group that has called for action on this issue for many years, "This study, which employed scientifically rigorous standards for data inclusion, demonstrates that the issue of cat predation on birds and mammals is an even bigger environmental and ecological threat than we thought. No estimates of any other anthropogenic [human-caused] mortality source approach the bird mortality this study calculated for cat predation.”

“To maintain the integrity of our ecosystems, we have to conserve the animals that play integral roles in those ecosystems. Every time we lose another bird species or suppress their population numbers, we’re altering the very ecosystems that we depend on as humans. This issue clearly needs immediate conservation attention,” he said further.

“The very high credibility of this study should finally put to rest the misguided notions that outdoor cats represent some harmless, new component to the natural environment. The carnage that outdoor cats inflict is staggering and can no longer be ignored or dismissed. This is a wake-up call for cat owners and communities to get serious about this problem before even more ecological damage occurs,” Fenwick said.

The study’s estimate of bird mortality far exceeds any previously estimated U.S. figure for cats. In fact, this magnitude of mortality may exceed all other direct sources of anthropogenic bird and mammal mortality combined. Other bird mortality sources would include collisions with windows, buildings, communication towers, vehicles, and pesticide poisoning.

The study estimated that the median number of birds killed by cats annually is 2.4 billion and the median number of mammals killed is 12.3 billion. About 69 percent of the bird mortality from cat predation and 89 percent of the mammal mortality was from un-owned cats. Un-owned cats are defined to include farm/barn cats, strays that are fed but not granted access to human habitations, cats in subsidized colonies, and cats that are completely feral.

Free-ranging cats on islands have caused or contributed to 33 (14 percent) of the modern bird, mammal, and reptile extinctions recorded by the International Union for Conservation of Nature Red List of threatened animals and plant species.

Native species make up the majority of the birds preyed upon by cats. On average, only 33 percent of bird prey items identified to species were non-native species in 10 studies. Studies of mammals in suburban and rural areas found that 75–100 percent of mammalian prey were native mice, shrews, voles, squirrels, and rabbits, all of which serve as food sources for birds of prey such as hawks, owls, and eagles.

The study charges that, “Despite these harmful effects, policies for management of free-ranging cat populations and regulation of pet ownership behaviors are dictated by animal welfare issues rather than ecological impacts. Projects to manage free-ranging cats, such as Trap-Neuter-Return (TNR) colonies, are potentially harmful to wildlife populations, but are implemented across the United States without widespread public knowledge, consideration of scientific evidence, or the environmental review processes typically required for actions with harmful environmental consequences.”

The Impact of free-ranging Domestic Cats on Wildlife of the United States
DOI: http://dx.doi.org/10.1038/ncomms2380
http://www.abcbirds.org/abcprograms/policy/cats/pdf/Loss_et_al_2013.pdf