We report on a new enantiornithine bird, Sulcavis geeorum, gen. et sp. nov., from the Jehol Group of northeastern China. The fossil preserves robust teeth with longitudinal grooves radiating from the occlusal tip preserved in the enamel on the lingual surface. This is the first known occurrence of specialized tooth enamel within Aves. Compared with other Mesozoic groups, stomach contents are hardly ever preserved within enantiornithine specimens; therefore, this new tooth morphology reveals new evidence regarding the diversity of trophic niches occupied by the clade. 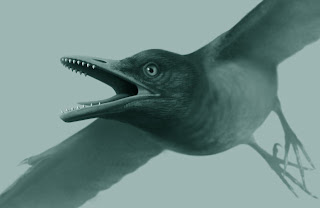 Etymology: Sulcavis, Latin ‘sulcus’ meaning groove, and ‘avis’ meaning bird, refers to the grooves on the teeth that make the new taxon unique. The species name, geeorum, is in honor of the Gee family of La Cañada, U.S.A., for their generous contributions in support of Mesozoic bird research. 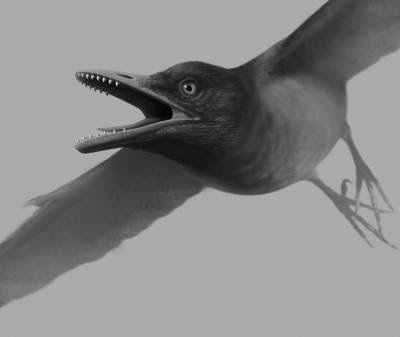 
Beak shape variation in Darwin's finches is a classic example of evolutionary adaptation, with beaks that vary widely in proportions and shape, reflecting a diversity of ecologies. While living birds have a beak to manipulate their food, their fossil bird ancestors had teeth. Now a new fossil discovery shows some fossil birds evolved teeth adapted for specialized diets.

A study of the teeth of a new species of early bird, Sulcavis geeorum, published in the latest issue of the Journal of Vertebrate Paleontology, suggests this fossil bird had a durophagous diet, meaning the bird's teeth were capable of eating prey with hard exoskeletons like insects or crabs. The researchers believe the teeth of the new specimen greatly increase the known diversity of tooth shape in early birds, and hints at previously unrecognized ecological diversity.

Sulcavis geeorum is an enantiornithine bird from the Early Cretaceous (121-125 million years ago) of Liaoning Province, China. Enantiornithine birds are an early group of birds, and the most numerous birds from the Mesozoic (the time of the dinosaurs). Sulcavis is the first discovery of a bird with ornamented tooth enamel. The dinosaurs – from which birds evolved – are mostly characterized by carnivorous teeth with special features for eating meat. The enantiornithines are unique among birds in showing minimal tooth reduction and a diversity of dental patterns. This new enantiornithine has robust teeth with grooves on the inside surface, which likely strengthened the teeth against harder food items.

No previous bird species have preserved ridges, striations, serrated edges, or any other form of dental ornamentation. "While other birds were losing their teeth, enantiornithines were evolving new morphologies and dental specializations. We still don't understand why enantiornithines were so successful in the Cretaceous but then died out – maybe differences in diet played a part." says Jingmai O'Connor, lead author of the new study.

"This study highlights again how uneven the diversity of birds was during the Cretaceous. There are many more enantiornithines than any other group of early birds, each one with its own anatomical specialization." offers study co-author Luis Chiappe, from Natural History Museum of Los Angeles County.