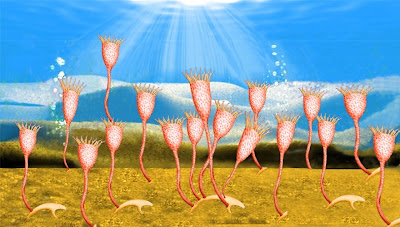 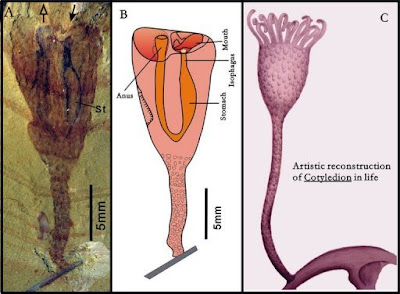 The Lophotrochozoa includes disparate tentacle-bearing sessile protostome animals, which apparently appeared in the Cambrian explosion, but lack an uncontested fossil record. Here we describe abundant well preserved material of Cotyledion tylodes Luo et Hu, 1999, from the Cambrian (Series 2) Chengjiang deposits, reinterpreted here as a stem-group entoproct. The entoproct affinity is supported by the sessile body plan and interior soft anatomy. The body consists of an upper calyx and a lower elongate stalk with a distal holdfast. The soft anatomy includes a U-shaped gut with a mouth and aboral anus ringed by retractable marginal tentacles. Cotyledion differs from extant entoprocts in being larger, and having the calyx and the stalk covered by numerous loosely-spaced external sclerites. The description of entoprocts from the Chengjiang biota traces the ancestry of yet another lophotrochozoan phylum back to the Cambrian radiation, and has important implications for the earliest evolution of lophotrochozoans. 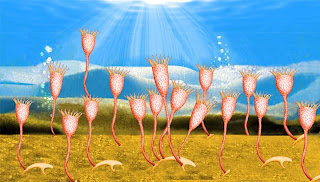 Ancient Entoproct Community
For a long time, scientists thought that some small tentacled fossils were early ancestors of jellyfish. But a new study has found that these ancient animals are actually related to an entirely different group of animals: the entoprocts, which are still alive today. The new fossil (Cotyledion tylodes) lived during the Cambrian period (around 520 million years ago), along with the ancestors of almost every group of animals alive today. It is larger than modern entoprocts: the fossils were 8-56 millimeters tall, while entoprocts alive today reach a maximum of 7 millimeters in height.
http://ocean.si.edu/ocean-photos/ancient-entoproct-community
http://www.dn.pt/inicio/ciencia/interior.aspx?content_id=3000722