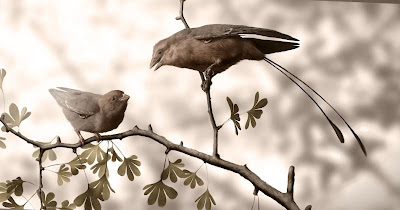 Hundreds of specimens of the beaked bird Confuciusornis sanctus have been recovered from Early Cretaceous lake deposits of northeastern China. These birds show remarkable variation in size and plumage, with some displaying two long, central ornamental rectrices (tail feathers) and others lacking them altogether. Although, traditionally specimens with ornamental rectrices were interpreted as males and those without them as females, this supposed sexual dimorphism has remained unconfirmed. Here we report on the discovery of medullary bone, a tissue unique to reproductively active female birds, in a specimen of C. sanctus (DNHM-D1874) lacking these feathers. Our discovery constitutes the first case of gender identification in a Mesozoic bird, and it provides undisputed evidence that individuals of C. sanctus without ornamental rectrices are females. By permitting gender identification in C. sanctus, our results provide insight into the onset of sexual maturity and attainment of adult body size of this and other early birds.

In a paper published in Nature Communications on January 22, 2013, a team of paleontologists including Dr. Luis Chiappe, Director of the Natural History Museum of Los Angeles County's (NHM) Dinosaur Institute, has discovered a way to determine the sex of a prehistoric bird species.

Confuciusornis sanctus, a 125-million-year-old Mesozoic bird, had remarkable differences in plumage -- some had long, almost body length ornamental tail feathers, others had none -- features that have been interpreted as the earliest example of avian courtship. However, the idea that male Confuciusornis birds had ornamental plumage, and females did not, has not been proven until now. Chiappe and the team studied hundreds of Confuciusornis fossils unearthed from rocks deposited at the bottom of ancient lakes in what is today northeastern China and found undisputed evidence of the gender difference: medullary bone.

"Our discovery provides the first case of sex identification in an ancient bird, an animal closely related to dinosaurs, such as the famous Velociraptor," said Chiappe. "When people visit dinosaur exhibits, they often want to know if the skeletons are male or female. We have nicknames like Thomas and Sue, but of all the thousands of skeletons of dinosaurs or early birds found around the world, only the sex of a few has been determined."

According to Chinsamy, the bone histologist on the team, "Just like modern hens, female Confuciusornis birds that lived 125 million years ago deposited this special bone inside their long bones, and then used it to make the calcium-rich eggshells." Finding such tissue -- present during a short period of time in reproductively active females -- in a specimen that lacked long feathers proved that those birds without ornamental plumage are females.

"This now permits us to assess gender differences in growth and development of this Mesozoic bird," she said.

But while this discovery offers evidence that both early and modern female avian species were essentially using the same physiological strategy to reproduce, it also spotlights an important difference in when they sexually matured.

"In human terms, knowing the sex of these specimens sheds light on when these early birds begin puberty," said Chiappe, "Now we know that early birds began reproducing way before they were full grown, a pattern that contrasts with what we know of living birds, which typically begin reproducing after they reach full body size." In that way, ancient birds produced offspring like dinosaurs, which also began to reproduce before they were fully grown.

The specimens, housed at the Dalian Natural History Museum in northeastern China, had been excavated from rocks formed at the bottom of ancient lakes in a forested environment surrounded by volcanoes. Ancient catastrophes, presumably related to volcanic eruptions, killed large numbers of birds and other animals, whose bodies were buried deep in the lake mud that helped minimize decay and preserving the organs, skeletons, and plumage. "This discovery is part of the big picture of understanding the early evolution of birds,'' Chiappe said, "and how living birds became what they are." 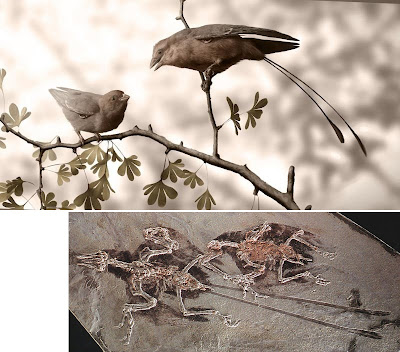