Abstract
The biotic recovery from Earth’s most severe extinction event at the Permian-Triassic boundary largely reestablished the preextinction structure of marine trophic networks, with marine reptiles assuming the predator roles. However, the highest trophic level of today's marine ecosystems, i.e., macropredatory tetrapods that forage on prey of similar size to their own, was thus far lacking in the Paleozoic and early Mesozoic. Here we report a top-tier tetrapod predator, a very large (>8.6 m) ichthyosaur from the early Middle Triassic (244 Ma), of Nevada. This ichthyosaur had a massive skull and large labiolingually flattened teeth with two cutting edges indicative of a macropredatory feeding style. Its presence documents the rapid evolution of modern marine ecosystems in the Triassic where the same level of complexity as observed in today’s marine ecosystems is reached within 8 My after the Permian-Triassic mass extinction and within 4 My of the time reptiles first invaded the sea. This find also indicates that the biotic recovery in the marine realm may have occurred faster compared with terrestrial ecosystems, where the first apex predators may not have evolved before the Carnian. 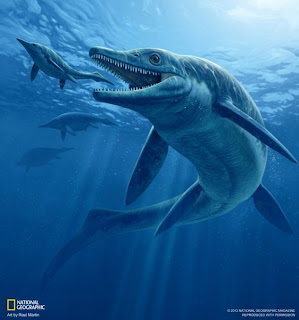 Etymology. The origin of the name is Thalatto- from Greek (sea, ocean) and archon (ruler); the speciﬁc name is sauro- from Greek (reptile, lizard) and phagis from Greek (eating).

Holotype. and Only Specimen. The Field Museum of Natural History (FMNH) contains specimen PR 3032, a partial skeleton including most of the skull and axial skeleton, parts of the pelvic girdle, and parts of the hind ﬁns.

Horizon and Locality. FMNH PR 3032 was collected in 2008 from the middle Anisian Taylori Zone of the Fossil Hill Member of the Favret Formation at Favret Canyon, Augusta Mountains, Pershing County, Nevada. The minimum geological age of the ﬁnd is 244.6 ± 0.36 Ma (SI Methods). The exact locality data are on ﬁle at the FMNH. 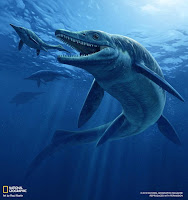 The 244-million-year-old fossil, named Thalattoarchon saurophagis (lizard-eating sovereign of the sea) is an early representative of the ichthyosaurs, a group of marine reptiles that lived at the same time as dinosaurs and roamed the oceans for 160 million years. It had a massive skull and jaws armed with large teeth with cutting edges used to seize and slice through other marine reptiles in the Triassic seas. Because it was a meta-predator, capable of feeding on animals with bodies similar in size to its own, Thalattoarchon was comparable to modern orca whales.

Remarkably, only eight million years prior to the appearance of Thalattoarchon, a severe extinction at the end of the Permian period killed as many as 80 to 96 percent of species in the Earth's oceans. The rise of a predator such as Thalattoarchon documents the fast recovery and evolution of a modern ecosystem structure after the extinction.

"Everyday we learn more about the biodiversity of our planet including living and fossil species and their ecosystems" Dr. Fröbisch said. "The new find characterizes the establishment of a new and more advanced level of ecosystem structure. Findings like Thalattoarchon help us to understand the dynamics of our evolving planet and ultimately the impact humans have on today's environment."

"This discovery is a good example of how we study the past in order to illuminate the future," said Dr. Rieppel of The Field Museum.

The ichthyosaur was recovered from what is today a remote mountain range in central Nevada. Most of the animal was preserved, including the skull (except the front of the snout), parts of the fins, and the complete vertebral column up to the tip of the tail. Supported by a grant from the National Geographic Society's Committee for Research and Exploration, the team of paleontologists took three weeks to unearth the ichthyosaur and prepare it for its transport by helicopter and truck out of the field.