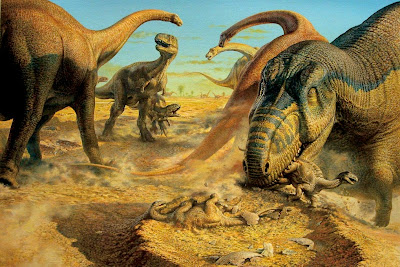 Aucasaurus was a genus of medium-sized theropod dinosaur from Argentina that lived during the Santonian stage (Anacleto Formation). It was smaller than the related Carnotaurus, although more derived in some ways, such as its extremely reduced arms and almost total lack of fingers. The type skeleton is complete to the thirteenth caudal vertebra, and so is relatively well understood, and is the most complete abelisaurid yet described.

Etymology: ‘‘Auca,’’ from Mapuche language, in reference to Auca Mahuevo, the fossil locality where the specimen was found; ‘‘saurus,’’ from the Greek, lizard; ‘‘garridoi,’’ in homage to Mr. Alberto Garrido, who discovered the holotype.