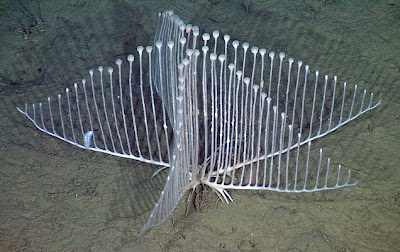 Ten thousand feet below the ocean's surface, the seafloor is a dark, desolate, and dangerous place where even the most benign-looking creatures can be deadly predators. Recently, a team of scientists discovered an unlikely new carnivorous species— the harp sponge (Chondrocladia lyra).

C. lyra is called the harp sponge because its basic structure, called a vane, is shaped like a harp or lyre. Each vane consists of a horizontal branch supporting several parallel, vertical branches. But don't let the harp sponge's whimsical appearance and innocent sounding name fool you, it's actually a deep-sea predator.

Clinging with root-like "rhizoids" to the soft, muddy sediment, the harp sponge captures tiny animals that are swept into its branches by deep-sea currents. Typically, sponges feed by straining bacteria and bits of organic material from the seawater they filter through their bodies. However, carnivorous harp sponges snare their prey—tiny crustaceans—with barbed hooks that cover the sponge's branching limbs. Once the harp sponge has its prey in its clutches, it envelops the animal in a thin membrane, and then slowly begins to digest it.

Using MBARI's remotely operated vehicles (ROVs) Tiburon and Doc Ricketts, researchers collected two sponges and made video observations of ten more. The first harp sponges that the scientists found had only two vanes. However, additional ROV dives revealed sponges with up to six vanes radiating out from the organism's center. Scientists believe the harp sponge has evolved this elaborate candelabra-like structure in order to increase the surface area it exposes to currents, much like sea fan corals.

The harp sponge's unusual shape and exposure to currents may also help it to reproduce more effectively. The swollen balls at the tip of the sponge's upright branches produce packets of sperm. These sperm packets are released into passing currents and are captured on the branches of other nearby sponges. The sperm then works its way from the packets into the host sponge to fertilize its eggs. As the fertilized eggs mature, these contact sites swell up, forming bulges part way up the host sponge's branches (see photo).

It has been less than twenty years since scientists first discovered that sponges could be carnivores. Since then, marine biologists have discovered dozens of new carnivorous species. In fact, all the members of the harp sponge's family Cladorhizidae — including the ping pong tree sponge are carnivores.

The deep seafloor can be a very inhospitable place. It is cold, dark, and resources are often scarce. The harp sponge is an extraordinary example of the kind of adaptations that animals must make in order to survive in such a hostile environment.

Abstract
Chondrocladia (Symmetrocladia) lyra subgen. nov., sp. nov., is described from northeast Pacific sites at Escanaba Ridge and Monterey Canyon at depths of 3316–3399 m. Two retrieved specimens are described in detail, while variations are described in ten photographed or videotaped specimens. The basic structure, termed a vane, is harp- or lyre-shaped. From 1 to 6 vanes extend by radial growth from the organism's center. The orientation among the vanes is approximately equiangular, such that together they display pentaradiate, tetraradiate, triradiate, or biradiate symmetries. Each vane is formed by a horizontal stolon supporting a series of upright, equidistantly spaced branches each of which terminates at its apex in a swollen ball in all observed specimens except the paratype. Swellings occur midway along the branches in the holotype, but not in the paratype. A linear row of filaments project from the sides, front, and back of each branch, and also from the tops of each stolon. The terminal balls are the sites of spermatophore production and release; mid-branch swellings are sites of oocyte maturation. The two megasclere spicule types have specific distributions; styles support rhizoids, stolons, and branches, while subtylostyles support filaments and terminal balls. Anchorate isochelae cover all surfaces. Enclosed crustacean prey on branches and stolons provide direct evidence of carnivory. The structure of the vanes maximizes surface area for passive suspension feeding. Increased surface area could also maximize spermatophore capture, with the sigmas projecting from the spermatophore surface being caught by projecting isochelae on filaments. Swellings on filaments are snared spermatophores, firmly fused to recipient tissues and undergoing destruction. Spermatophores on filaments are present in branch swellings containing early and mature oocytes. Oogenesis and maturation occur only in proximity to branch swellings, suggesting that development is induced by spermatophore reception. Symmetrical development of uniserial branched stolons (the vanes) characterized members of the new subgenus Symmetrocladia.

It has been 17 years since incontrovertible proof of carnivory by sponges was published by Vacelet & Boury-Esnault (1995). Before that major discovery, sponges were generally regarded as rather simple, filter-feeding bacterivores and herbivores, restricted in their aggressive activities to waging chemical warfare in substrate competition with other sessile organisms (Jackson & Buss 1975; Pawlik et al. 2007) and in antipredatory defense against mobile animals (Wulff 2002; Pawlik 2011). It had been known that some sponges aggressively kill corals at the scale of single coral heads (e.g., Cliona delitrix pang 1973: Chaves-Fonnegra & Zea 2007), and occasionally over a larger reef-wide scale (e.g., Terpios hoshinota rützler & muzik 1993), but they had not been known to pose a threat to mobile animals. Our understanding of sponge biology changed significantly when Vacelet and Boury-Esnault showed that sponges without choanocyte chambers passively ensnared zooplankton, aggressively enclosed them in a cavity by cell migration, and effectively dismembered them into small particles, which could be phagocytosed and digested intracellularly.

The great majority of known or suspected carnivorous sponges belong to the demosponge family Cladorhizidae (all members of the presently recognized seven genera); a few members of the closely related families Esperiopsidae and Guitarridae are also suspected to be carnivorous by similarity of body form and the presence of erected chelate microscleres on their external surface (Vacelet 2007). When carnivory was first proven, there were 84 species in the family Cladorhizidae, a group dominated in form by small, thin, bottle-brush sponges with little or no “body.” Intense interest in documenting the variety and ubiquity of this group has seen 24 new species described in the intervening period of 18 years (1995–2012), compared with only six species described in the previous 18 years (1977–1994). In spite of the increase in taxonomic activity, there is still relatively little known about details of body organization, reproduction, and cytology of the carnivorous sponges. Only five species can be considered known in any significant detail: Asbestopluma hypogea vacelet & boury-esnault 1996; A. occidentalis (lambe 1893) (Riesgo et al. 2007), Cladorhiza methanophila vacelet & boury-esnault 2002; C. pteron reiswig & lee 2007; and Chondrocladia gigantea (hansen 1885) (Kübler & Barthel 1999). Members of the last genus retain aquiferous canals and choanocyte chambers that, at least in some species, function in maintaining water pressure for inflation of spectacular terminal globes.

Here, we report the results of our examination of two recently collected specimens and ten additional imaged specimens of a spectacular and large new species of Chondrocladia from deep water in the northeast Pacific Ocean. We provide a taxonomic description of this species, summarize variation in its body form, and describe details of cellular organization, including its feeding and reproductive systems. We also extrapolate from the reproductive evidence to suggest processes that maintain this species in nature.