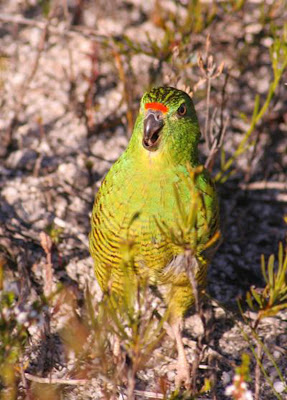 
We examined cytochrome b sequence data to resolve the intraspecific taxonomy of ground parrots Pezoporus wallicus. The species occurs in fragmented coastal heaths in south-eastern and south-western Australia. Net nucleotide divergences among all eastern populations were very low (0.0–0.6%) and genetic diversity unstructured, suggesting relatively recent common ancestry. Gene flow among them was probably maintained via land bridges and the persistence of suitable habitat during the Pleistocene. In contrast, net nucleotide divergence was high (4.4–5.1%) between western and eastern populations, suggesting more ancient divergence about 2 million years ago. The magnitude of divergence between eastern and western lineages is similar to a wide range of avian congeners. Our data support the need to reconsider the intraspecific taxonomy of ground parrots, and we cautiously suggest the recognition of Western Ground Parrots as a species, P. flaviventris, for conservation prioritization, planning and management purposes. Given their recent precipitous decline to approximately 110 individuals, most of which occur at one location, this makes Western Ground Parrots one of the world’s most threatened bird species.

Western Australia's New Parrot Species
Researchers found many new animal species these past years and the latest in date is Pezoporus flaviventris – the ground parrot of Western Australia.

A team of scientists from the Australian Wildlife Conservancy and the University of Adelaide, analyzed DNA samples from 160-year-old museum specimens of ground parrots, to see whether there were differences between the specimens in the east and those in the west, and concluded that the western populations should be considered as a new species.


The experts have found that the decreasing populations of ground parrots in Western Australia belong to another species, than those found in the eastern part of the country.

The DNA study concluded that the two species of parrots diverged from each other, almost 2 million years ago, and this is actually a very important finding, crucial for animal conservation.

Team member Jeremy Austin, of the Australian Center for Ancient DNA at the University of Adelaide explained that these “findings demonstrate that museum collections, some going back more than 150 years, continue to be relevant and can provide critical information for understanding and conserving the world's biodiversity into the future.”

This discovery is truly exciting but the researchers are very concerned for the survival of these endangered birds, OurAmazingPlanet reports.

“The western ground parrot has declined rapidly in the last 20 years; there are now only about 110 birds surviving in the wild, and most of these are confined to a single national park.
“It is now one of the world's rarest birds.”

Allan Burbidge of the Western Australia Department of Environment and Conservation, also member of the team said that if this national park was to suffer from a single wildfire, or predators, like cats, were to be introduced in the area, the ground parrot species could rapidly become extinct.

“There is now an urgent need to prevent further population declines and to establish insurance populations into parts of the former range,” he added.

The findings were published in the international conservation research journal Conservation Genetics.