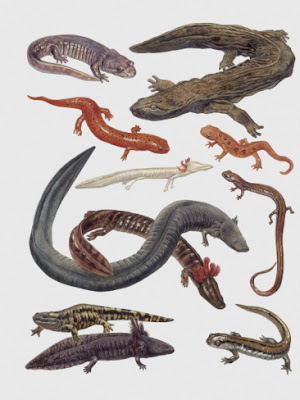 Various recent works, particularly based on nucleic acid sequencing, have improved our understanding of the phylogenetic relationships among recent salamanders. Besides, new species and other taxa (subspecies, genera, subgenera) are regularly described in this group. Some of these data, but not all, have been the basis for taxonominal (taxonomic and nomenclatural) changes. Many taxonominal problems nevertheless remain

unsettled in this group. We provide here a comprehensive review of the taxonominal hierarchy of this order, for which we strongly insist that the valid nomen is URODELA Duméril, 1805. In this taxon, we recognize a total of 1240 taxa, including two suborders, two infraoders, 10 recent and 5 fossil families, 70 recent and 64 fossil genera, 673 recent and 117 fossil species, and 111 recent subspecies. This works leads us to introduce 22 new nomina, at the following ranks: subfamilia (1), tribus (4), subtribus (5), genus (4) and subgenus (8). We also discuss several general questions of taxonomy and nomenclature, in particular regarding the structure of taxonominal hierarchies, the use of taxonomic categories and nomenclatural ranks in taxonomy, the nomenclatural Rules for ranks above superfamily, and the nomenclatural status of various nomina. We think the taxonominal hierarchy should reﬂect the best as possible the hypothesized phylogenetic relationships between species and other taxa, and not a gradist approach of taxonomy which is still prevalent in pseudoranked ergotaxonomies in which ranks are meant at expressing ‘‘degree of divergence’’ between taxa or the hypothesized age of cladogeneses. The use of ranks to express phylogenetic hypotheses on relationships is fully compatible with the Rules of the Code, provided a consistent and strict use of the hierarchy of nomenclatural ranks is followed.