A Jurassic salamander, Beiyanerpeton jianpingensis (gen. et sp. nov.), from a recently found site in western Liaoning Province, China is the earliest known record of Salamandroidea. As a Late Jurassic record of the group, it extends the range of the clade by ~40 Ma. The Late Jurassic taxon is neotenic and represented by exceptionally preserved specimens, including fully articulated cranial and postcranial skeletons and bony gill structures close to the cheek region. The fossil beds, consisting of dark-brown volcanic ash shales of the Upper Jurassic Tiaojishan (Lanqi) Formation (Oxfordian), underlie trachyandesite rocks that have yielded a SHRIMP zircon U-Pb date of 157 ± 3 Ma. The fossiliferous beds are substantially older than the Jehol Group, including the Yixian Formation (122–129 Ma), but slightly younger than the Middle Jurassic Daohugou horizon (164 ± 4 Ma). The early fossil taxon shares with extant salamandroids derived character states, including: separated nasals lacking a midline contact, angular fused to the prearticular in the lower jaw, and double-headed ribs on the presacral vertebrae. In contrast to extant salamandroids, however, the salamander shows a discrete and tooth-bearing palatine, and unequivocally nonpedicellate and monocuspid marginal teeth in large and presumably mature individuals. The ﬁnding provides insights into the evolution of key characters of salamanders, and also provides direct evidence supporting the hypothesis that the split between Cryptobranchoidea and Salamandroidea had taken placed before the Late Jurassic Oxfordian time. In this aspect, both paleontological and molecular data now come to agree. 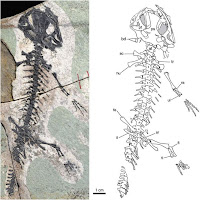 Salamander found in China oldest of its kind
Six salamander specimens were found in an ancient dry lakebed in China recently and now the team of Ke-Qin Gao from Peking University and Neil H. Shubinb of the University of Chicago has identified them as the oldest Salamandroidea specimens ever found. As they write in their paper published in the Proceedings of the National Academy of Sciences, the specimens are believed to be approximately 157 million years old. Read more at: http://phys.org/news/2012-03-salamander-china-oldest-kind.html