Abstract
The Asian Temple Pitviper Tropidolaemus wagleri is a widespread polytypic species complex with a complicated taxonomic history, a lengthy species synonymy list, and a geographic distribution encompassing Vietnam, Thailand, Malaysia, Singapore, Brunei, portions of Indonesia, and the Philippines. As a prelude to a comprehensive review of this species complex, we describe a new species of Temple Pitviper based on five historic museum specimens from the Indonesian island of Sulawesi. The new species can be distinguished from sympatric members of the Tropidolaemus subannulatus complex and other congeners on the basis of its conspicuous color pattern and scalation characters. Available collecting data suggest that the new species has a wide distribution in rainforests and lower montane wet forests of Sulawesi Utara and Sulawesi Tengah provinces. 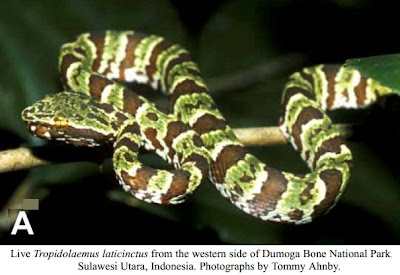 Distribution and habitat: Tropidolaemus laticinctus is so far known only from the Indonesian Provinces of Sulawesi Utara and Sulawesi Tengah in northern Sulawesi island (fig. 12). Available information on collecting localities place this species in lowland to lower montane rainforest. The vertical distribution of the new species extends from near sea level (Paleleh) and about 100 m (Matinan Mts.) to at least 550 m above sea level (1800 feet, at Sonder, Sulawesi Utara; Boulenger [1897]). A specimen in Dumoga Bone National Park (Sulawesi Utara) was observed close to a small river (T. Ahnby, personal communication; fig. 11A+B).

Etymology: The specific epithet, the Latin adjective laticinctus, meaning broad-ringed or broad-banded, alludes to the color pattern on the body of the new species, which consists of comparatively broad brick-red to brown rings, and readily distinguishes it from sympatric congeners (with very narrow blue or red spots or bands on an otherwise solid bright green dorsum), as well as from any other known member of the genus
Tropidolaemus.