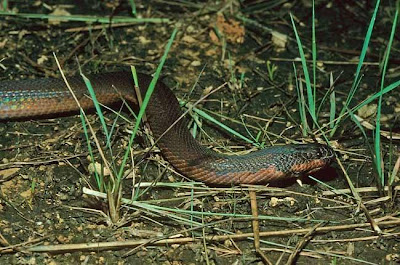 Abstract
A new species of homalopsine water snake of the genus Enhydris is described from Kalimantan, Indonesia on the basis of three specimens. It differs from its close relative Enhydris doriae (Peters, 187 1) in the number of scale rows at midbody, a higher number of lower labials and ventral scales, plate like temporal scales, and a distinctive color pattern.

Etymology: Named after the late Burmese herpetologist Ko Ko Gyi, Professor at Rangoon University, and the first zoologist to revise the entire subfamily Homalopsinae in the 20th century.

‘Chameleon' snake can turn white in minutes
A new species of snake capable of rapidly changing colour has been discovered deep in the forests of Borneo. Two specimens of the Kapuas mud snake (Enhydris gyii) were discovered in the swampy forests of Indonesia's Betung Kerihun National Park.

The half-metre-long venomous snake is normally brown with an iridescent sheen, but can turn white. It is not yet known whether the snake can become other colours too, or what exactly causes the change.