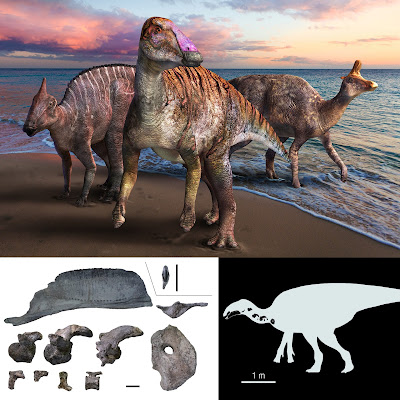 Abstract
Here we describe a partial hadrosaurid skeleton from the marine Maastrichtian Kita-ama Formation in Japan as a new taxon, Yamatosaurus izanagii gen. et sp. nov., based on unique characters in the dentition. Our phylogenetic analysis demonstrates Yamatosaurus izanagii belongs to Hadrosauridae, composed of Hadrosaurus foulkii + (Yamatosaurus izanagii + (Saurolophinae + Lambeosaurinae)). The coracoid lacks a biceps tubercle as in non-hadrosaurid hadrosauroids, suggesting its presence is a key feature for the clade of Saurolophinae and Lambeosaurinae. The evolutionary rates analysis further supports that shoulder and forelimb features, which are likely to have been involved in locomotion, were important for the early evolution of Hadrosauridae. Our biogeographic analyses show that basal hadrosaurids were widely distributed in Asia and Appalachia, that the clade of Saurolophinae and Lambeosaurinae originated in Asia, and that eastern Asia may have served as a refugium of relict hadrosauroid taxa such as Plesiohadros djadokhtaensis, Tanius sinensis, and Yamatosaurus izanagii during the Late Cretaceous. The contemporaneous occurrence of basal (Yamatosaurus izanagii) and derived (Kamuysaurus japonicus) hadrosaurids during the Maastrichtian in Japan is the first record in Asia. Because of the long geographical distance between these localities, they likely did not co-exist, but instead demonstrate some level of provinciality. 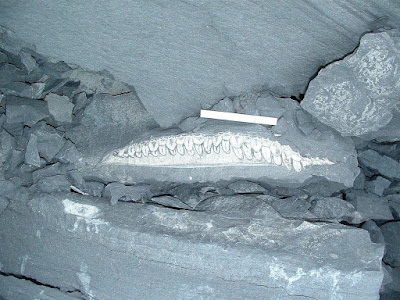 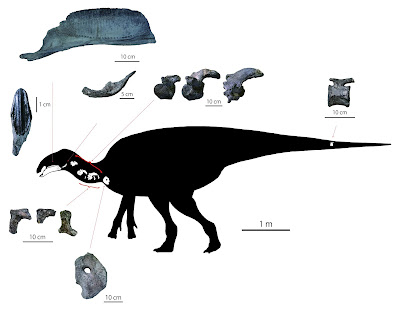 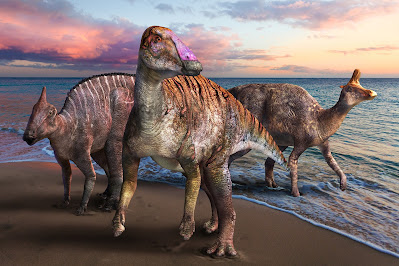 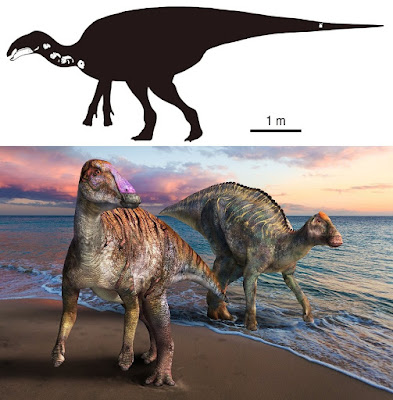 Systematic paleontology
Dinosauria Owen, 1842
Ornithischia Seeley, 1888
Ornithopoda Marsh, 1881
Hadrosauridae Cope, 1869
Yamatosaurus izanagii gen. et sp. nov.
Holotype: MNHAH D1-033516, a right dentary, a right surangular, twelve isolated dentary teeth, four cervical vertebrae, a distal caudal vertebra, three cervical ribs, and a coracoid. This specimen is stored in the Museum of Nature and Human Activities, Hyogo, Sanda City, Hyogo Prefecture, Japan.
Diagnosis: A hadrosaurid with unique characters in having only a single tooth as a minimum number of functional teeth per tooth position in the middle of the dentary dental battery (9th, 11th, 14th, 16th, 19th, 21st, and 23rd tooth positions) and the complete absence of the “branched ridges” on the dentary tooth occlusal surfaces. It is also unique in the combination of the additional following characters: the low angle between the dentary symphysis and lateral surface of the dentary and ventrally facing ventral surface of the surangular.
Etymology: “Yamato” refers to the ancient name for a region of the Japanese archipelago, including the western half of the main island (Honshu Island), Shikoku Island, and the northern half of Kyushu Island, ruled by the Yamato Kingdom from the third to the seventh century. “Sauros” means reptiles. The specific name, “izanagi”, refers to a deity in Japanese mythology, which created eight countries of Yamato with another deity, Izanami, based on the oldest history book in Japan called “Kojiki (Records of Ancient Matters)”, published in 712 CE (Common Era). The first country created was the Awaji Island, followed by the Shikoku, Oki, Kyushu, Iki, Tsushima, Sado, and Honshu islands.
Locality and horizon: Locality Aw (Morozumi) of Yura Town, Sumoto City of the Awaji Island, Hyogo Prefecture, Japan; the early Maastrichtian (71.94–71.69 Ma) Kita-ama Formation of the Izumi Group. 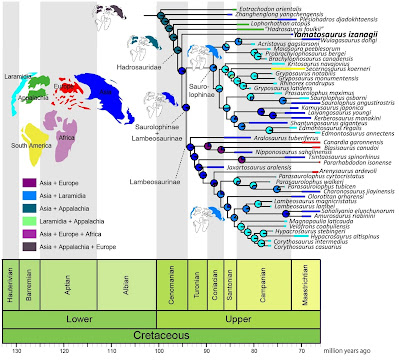 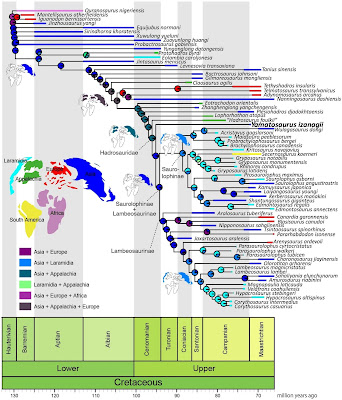 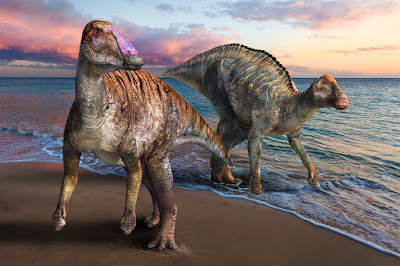 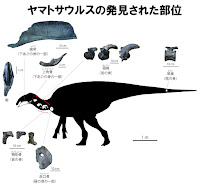